Our verdict on the Chevrolet Sonic hot hatch, which could come to the UK next year as the Aveo RS 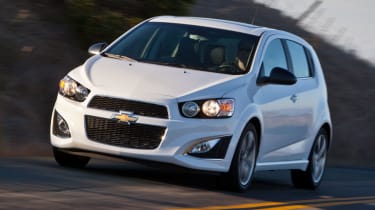 The Aveo RS lives up to its promise of being more fun to drive, offering an engaging blend of pace and affordability in a stylish, well equipped package with smart features, such as the MyLink infotainment system. It won’t challenge a Ford Fiesta ST, or even a Suzuki Swift Sport dynamically, but it would be a shame if Chevy did not bring the car to Britain.

The Chevrolet Sonic RS – which will be badged Aveo RS if it goes on sale in the UK early next year – is a warmed-up version of Chevy’s supermini, designed to take on the Suzuki Swift Sport. It’s stiffer, faster and better-looking than the standard car, with a 138bhp 1.4-litre turbocharged four-cylinder engine.

Offered exclusively as a five-door, the RS has lowered suspension and its own 17-inch five-spoke alloy wheel design, with chunkier front and rear bumpers.

Climb inside, and you’ll find well bolstered leather and suede sports seats, with neat red piping and bright red RS lettering. There are also unique dials and a flat-bottomed steering wheel, plus Chevrolet’s MyLink system, which includes Bluetooth and DAB audio, and lets you download phone apps (like sat-nav) directly through the car’s seven-inch touchscreen.

Start the 1.4-litre turbo engine up, and there’s a nice burble, but it’s far from loud. The larger wheels mean a firmer ride than on the standard car, but it copes adequately with bigger bumps and is OK in town.

Another surprise is how well it deals with B-roads: the throttle is responsive and easy to control as you quickly shift through the six-speed manual gearbox, which has shorter ratios than on the standard car. In-gear acceleration is acceptable, but its sweet spot, as with all small engines, is higher in the rev range, and it needs working hard to produce its best.

Plenty of grip and a sharp turn-in mean there’s lots of fun to be had – there is an ESP button, but even with it switched off, the Aveo hangs on well. The electric power-steering is nicely calibrated, too – it’s light and responsive, and combined with strong brakes, makes the RS easy to position on the road. However, it would benefit from a bit more in the way of feedback.

Make no mistake, though, this car will be a very appealing proposition if it makes it to the UK. Chevrolet has not confirmed it will go on sale here, but it’d be a shame if it passed the Aveo RS up. It’s a fine cut-price alternative to established hot hatches, and while it’s no class leader in terms of pure driving dynamics, it’s more capable than you might think.