Auto Express has done it again! We're first to deliver a verdict on an all-new Chevrolet - and this time it's the turn of the daring Aveo. 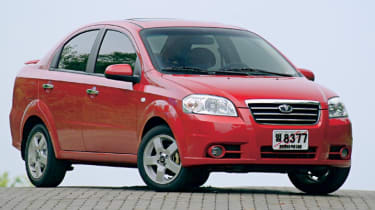 Although based on the current Chevrolet Kalos, the new Aveo is a totally different proposition to the popular Daewoo hatchback. It's not only bigger, it offers greater luxury and is more generously equipped. Thanks to its spacious cabin and boot, the Aveo even has room to accommodate five peo-ple and their lug-gage in relative comfort.

Auto Express has done it again! We're first to deliver a verdict on an all-new Chevrolet - and this time it's the turn of the daring Aveo. Based on the Kalos, and revealed at this year's Shanghai Motor Show, the car is the first proper model from the reborn Korean marque.

So far, Chevrolet has relied on re-badged, facelifted Daewoos - only now is it getting cars designed under the eye of parent firm General Motors. As a result, the Aveo is far more than a booted version of the supermini with which it shares many parts, and hints at the appearance of future models, including the S3X SUV and facelifted Kalos.

Launched in Korea this week (where Chevrolets still wear Daewoo badges), it's one of the most upmarket-looking cars the maker has yet revealed, promising a huge leap forward in quality.

But while the exterior is tidy, it's the interior which company bosses will be most proud of, with upmarket new fabrics and metal trim. Finishing touches such as the switchgear and smart instru-mentation further add to the appeal. Safety has been top of the agenda, too, as the car has front dual and side airbags, as well as stability control.

It's a pity the equipment list doesn't include steering reach movement, however. The wheel adjusts for rake only, so if you want to get closer, you'll have to move the driver's chair. Thankfully, there's plenty of interior space, and the Aveo holds five in comfort.

Clad in leather, our test car's seats were supportive, but mounted a little too high. Yet passengers in the back benefit from plenty of headroom, and to boost practicality further, there's a 60:40 split-fold facility for the rear bench. In Korea, only a single engine is available at launch: a 1.5-litre straight four-cylinder unit delivering 83bhp.

Refinement is reasonable, although the five-speed manual gearbox could do with some improvement. The self-shifter is reluctant to change ratios and lacks the precision of rival set-ups. Still, the car is a capable cruiser. Front McPherson struts and a rear torsion beam offer a comfortable ride - although the handling is a bit on the soft side.

But even so, the new Aveo is still a car Chevrolet can feel proud of - and one that points to a bright future.