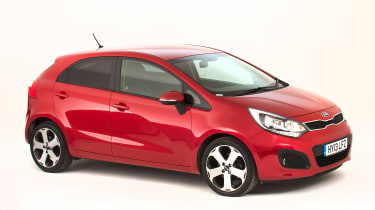 Forget the lacklustre models that came before it; the outgoing, third-generation Rio was one of the most capable cars in its class when it arrived back in 2011. It won’t excite driving enthusiasts as there was no sporty edition, but as dependable, great-value transport, the Rio has everything you need. As the posher models were among some of the most popular buys when these cars were sold new, there’s now no shortage of high-spec Rios to choose from on the second-hand market. These offer some hi-tech equipment more usually seen on bigger, more expensive models. Even the earliest Rio Mk3s are still covered by Kia’s seven-year warranty – and impressively, if you buy a two-year-old example, you’ll enjoy a longer guarantee than you’ll get with most new rivals.

An all-new Kia Rio will arrive in 2017 and it’s set to be a cracker. It will take the brand even further upmarket, but for a fraction of the cash you could bag one of the outgoing third-generation models.

The original Rio that arrived in 2001 was distinctly underwhelming, as was the second, 2005 version. Yet it was a case of third time lucky when the third iteration appeared in 2011. At last Kia had an impressive small hatch. Gone were the awkward looks, dated interiors and lacklustre driving dynamics, replaced by a sharply styled supermini with a modern cabin, excellent engines and an improved experience behind the wheel.

The Kia Rio first went on sale in 2001, and is now in it’s third generation. An all-new model is due this year, but it’s the Mk3 that we’re focusing on in this review. 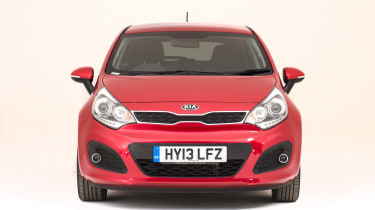 The third-generation Rio arrived in September 2011 in five-door form only. Buyers could pick from 1.25 or 1.4-litre petrols along with 1.1 or 1.4-litre diesels; the former emitted only 85g/km of CO2 in entry-level guise.

The three-door Rio launched in January 2012 was offered with the same engines and trim levels as the five-door, but with a £600 saving. In April 2014 a new range-topping 4 appeared, along with an auto option. The latter was offered only in five-door 1.4-litre petrol form, though, in 3 trim.

A facelifted Rio hit showrooms in March 2015, with improved cabin materials, extra standard kit and standard touchscreen nav on posher editions. But in spring 2017, an all-new Mk4 model will arrive in dealers.

Three-door cars are rarer than five-doors and obviously not as practical, yet prices are slightly lower. The smaller engines are sweet and refined, but if you drive a lot of miles, especially on motorways, try a 1.4. 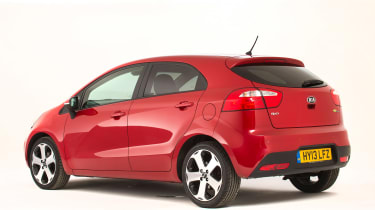 Although the 1.4 petrol four-speed auto is okay, the six-speed manual box is more common and much better to use. Avoid Rios without air-con; all cars have a CD/tuner and electric front windows, while 2 spec brings 16-inch alloys, powered rear glass, a multifunction wheel and electrically heated, adjustable and folding mirrors. The 3 adds 17-inch alloys, rear parking sensors, privacy glass, climate and cruise control, auto lights and wipers plus heated front seats. The 4 has a sunroof, leather and a heated wheel.

Alternatives to the Kia Rio Mk3

The toughest competition comes from Ford’s Fiesta, which is cheap to buy and run. If you want practicality, the Vauxhall Corsa is a safe bet as it’s got a big boot and spacious cabin. Plus, because both are among the UK’s most popular new cars, there are plenty to choose from used.

Hyundai’s i20 is great value, very reliable and closely related to the Kia, while the Peugeot 208 is another cracker with some brilliant engines. It looks smart, too. 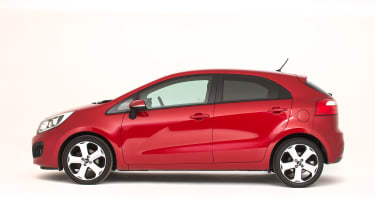 If your budget is flexible, Toyota’s Yaris is dependable but costs more than an equivalent Rio, especially in hybrid form.

The ISG stop/start set-up can work erratically. Some owners switch it off altogether, as it makes little difference to fuel economy.

The Kia has no spare wheel fitted as standard. There is space for one in the boot, although you will have to buy it separately. 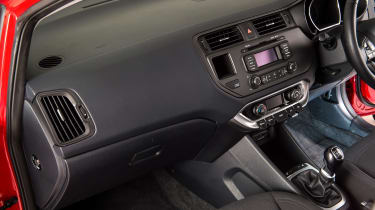 Dashboard rattles can be a real issue, to the point where the whole facia has to be removed and refitted for an effective fix.

Some owners have had problems with the Hill Hold Assist and the ESP seemingly not working. Testing the latter isn’t easy, though.

Packed with high-quality materials and neatly designed, the Rio’s dash is clear yet far from bland. It also feels durable, plus the seats are comfortable and the rear offers lots of room for two adults. Boot space is good, too: with the back seats up, capacity stands at 288 litres; fold them and you get 923 litres. 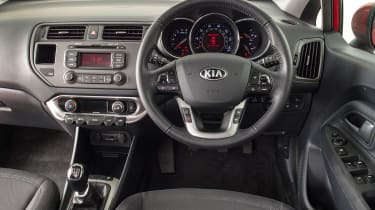 All Rio engines are chain-driven, so there are no timing belts to replace, but the air-con should be regassed every three years (at £50) and the coolant renewed every 10 years or 120,000 miles. This is included in the service.

Three and five-year service packs have been available since launch. They have to be bought within 11 months of purchase and are transferable between owners. 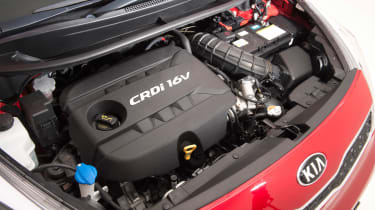 The Rio Mk3 has never been recalled. Indeed, Kia has issued only three recalls across all cars built since 2011.

The first, in March 2014, was for the old Sedona, as its front suspension could fail. In May 2014 some Souls and Sportages built from August 2011 to November 2012 were recalled over potential seatbelt issues. And in August 2014, a steering rack fault hit Souls made in December 2013.

As the Rio hasn’t been affected, you can concentrate on the condition and service history of any potential buy.

Having peaked at number five in our Driver Power 2014 satisfaction survey, the Rio Mk3 dropped to 59th in 2015 and 71st in 2016. Rankings of 22nd for reliability and 27th for running costs are impressive, but 71st for build quality is disappointing. So, too, is 71st for seat comfort and 78th for practicality.