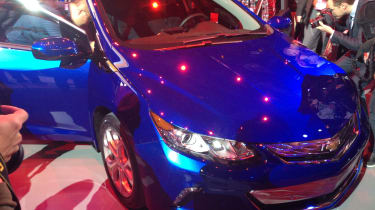 The teasing is over for fans of the Chevrolet Volt, as the next-generation electric car is finally unveiled to press and public at the Detroit Motor Show. With a sleeker new look, improved powertrain tech and a weight reduction, the new Volt hopes to take the fight to rivals such as the BMW i3 and Tesla's range.

The headline figures are most important for new EV hybrid buyers. Chevy claims the new Volt can now travel more than 400 miles between fill-ups, 50 of those under all-electric power. It's all thanks to a new, 192-cell/18.4-kWh lithium-ion battery pack and new, 111-kW two-motor drive unit. 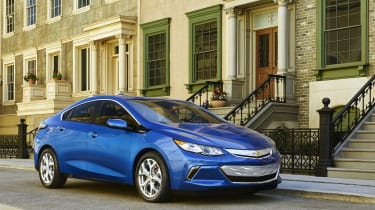 The firm claims the new 'Voltec' system is up to 12 per cent more efficient and approximately 45kg lighter than the previous system. Mated to a new 1.5-litre petrol engine developing just under 100bhp, the new Volt can get from 0-60mph in 8.4 seconds and 0-30 in 2.6. The top speed is 98mph.

As before, the hybrid powertrain is a 'range-extending system', where the petrol engine can be used as a separate generator to charge the batteries. Yet, unlike the i3, that engine can be redirected to power the front wheels when necessary, allowing for more power and fuel range.

Just like with the first-generation model, the 2016 Volt has four driving modes: Normal - which makes the most of battery range - Sport - for quicker acceleration - Mountain - where engine and battery power are combined to travel up steep slopes - and Hold which stores battery power for long-distance cruising such as on the motorway. 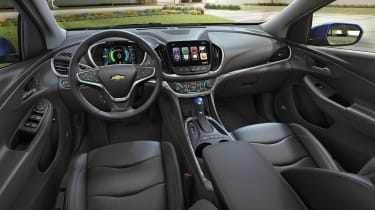 There's a new look too - the 2016 Volt has a smoother and more slippery shape and is a step away from the angular, quirky-looking previous-generation Volt. The interior also gains a much-needed fifth seat for added practicality, as well as the latest generation of infotainment and cabin tech.

Alan Batey, senior vice president of Chevrolet North America said: "Volt is the US's best-selling plug-in car and two thirds of owners are new to the brand. Volt owners average more than 970 miles between fill-ups and they drive on battery power 80 per cent of the time. 50 customers told us new Volt had to have better acceleration and better efficiency - and we believe we've done that."

With Chevrolet pulling out of Europe, the UK won't be seeing this new Volt despite its improved green credentials. Vauxhall has revealed to Auto Express in the past that the new Volt won't form the basis of a new Ampera - the first-generation Volt's sister car.