If there's one thing that all parents agree on, it's that having children is an expensive business. With household bills mounting up, finding cheap family transport is a priority for almost everyone. 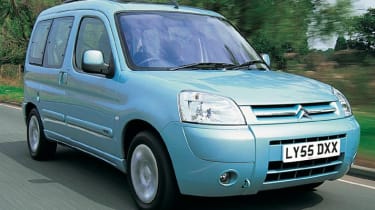 With a punchy diesel engine, the new Berlingo Multispace offers great value for money. It's hard not to be charmed by the honest functionality of the van-derived five-seater, which makes the awkward gearbox and boxy styling pale into insignificance.

If there's one thing that all parents agree on, it's that having children is an expensive business. With household bills mounting up, finding cheap family transport is a priority for almost everyone.

When it comes to value for money, Citroen's Berlingo Multispace is hard to beat. In the past, the van-based MPV has been hindered by an agricultural diesel unit at the top of the range, but now the French firm has put its latest 1.6-litre oil-burner under the bonnet.

Turn the key and the engine clatters into life. But the noise is a result ofthe Berlingo's lack of soundproofing rather than poor refinement, and things are reasonably quiet on the move.

Official figures suggest 0-62mph takes 12.9 seconds, but in-gear acceleration is strong and the Citroen feels swift and capable. The only real drawbacks are the long-throw gearchange, which soon becomes a chore, and the upright driving position. This could leave taller drivers with aching legs.

Given its commercial origins, the Berlingo has a surprisingly suppleride, but it suffers from body roll and vague steering. With combined fuel economy of 52.3mpg few five-seaters are cheaper to run, although it's the price that will seal the deal for most buyers. Citroen's current cashback offer means you can buy the 91bhp Desire model for £10,565 and get fold-out tables and a boot storage box as standard. Air-conditioning is the only omission, and adds £730 to the cost.

If you're not too concerned with image and a sporty driving experience, this latest Berlingo is arguably the biggest bargain in the Citroen range.