Can the new Volkswagen Caddy Maxi Life knock the Citroen Berlingo XL off the top step of the MPV podium? 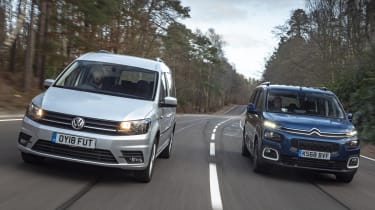 SUVs tend to steal the limelight for buyers wanting flexible transport, because they combine usability with a trendy image. But what if you need maximum practicality on a budget?

We’re talking about seven-seaters that can accommodate a large family in an affordable package delivering decent efficiency and comfort. A van-based MPV fits these criteria and there are new ones on the market. Here Volkswagen’s Caddy Maxi Life faces the Citroen Berlingo XL, which is fresh from a win against its Vauxhall Combo Life XL sibling and the Ford Grand Tourneo Connect.

The two contenders in this test feature lower-powered diesels, so efficiency will be important. But we’ll also look at value for money and how the VW and Citroen combine this with a good level of kit. 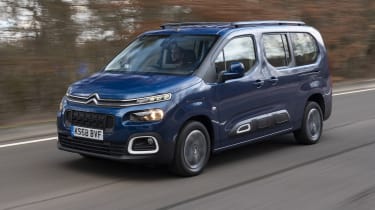 The Berlingo is all about space and how much of it you can use. In XL trim there’s masses of room thanks to packaging made possible by the EMP2 platform. Seven seats are standard and they all fold individually, too. Those in the middle row fold and slide independently (Citroen calls it ‘Magic Flat modularity’) to either compromise passenger space in the first two rows or maximise load space if you’re not using the third row of seats. These are easy to fold away and can be accessed from the boot area. When stowed, the seats reveal a fully flat load floor and plenty of cargo space.

In seven-seat form the Berlingo offers a boot capacity of 322 litres – which is about as much as a family hatchback, but less than the Caddy in this set-up. Fold the rear row of seats down and there’s 1,538 litres, which is more than most people will need, even if it still trails the VW in this configuration. 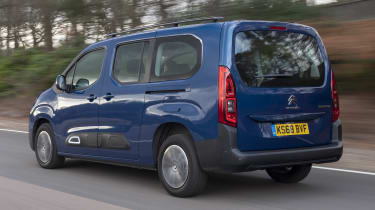 The tall roofline means there’s more headroom than in the Caddy, while some of the extra height has been given over to clever storage, as we’ll see. Items can also be placed underneath the middle row of seats, because they are on subframes. One welcome by-product is that this creates a stadium-seating effect with the higher third row, so even kids in the back get a good view out.

The sliding doors mean access to the cabin is simple and strapping in children when parked in tighter spaces shouldn’t be too difficult. Just watch those doors with small fingers, because they’re heavy and can slide shut if not latched properly.

Even when the Berlingo is empty, its 99bhp 1.5-litre four-cylinder turbodiesel engine doesn’t have much go, so loaded up with luggage or adult passengers it feels even more sluggish. It took 14.5 seconds to do the 0-60mph sprint, which wasn’t helped by the imprecise, baggy-feeling gearshift. It’s only a five-speed, too, so with only five ratios to cover the car’s speed range the engine has to work harder, but this is the same as in the Volkswagen.

Performance is adequate and nothing more; if you really want to extract the maximum from the Citroen you have to work the box hard and rev the motor, which gets noisy and ruins refinement. 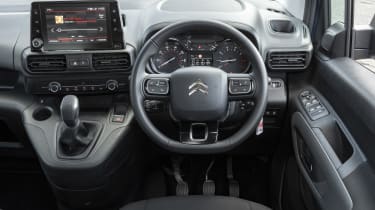 Still, the level of equipment on offer is good in Flair trim. You get parking sensors (helpful because the Berlingo is a big MPV that’s not the easiest to judge when reversing), an eight-inch touchscreen with sat-nav, Apple CarPlay, Android Auto and DAB radio, air-conditioning and tray tables on the rear of the front seats. There’s some good standard safety tech, too, which is important for a vehicle that’ll be used to transport people and families. 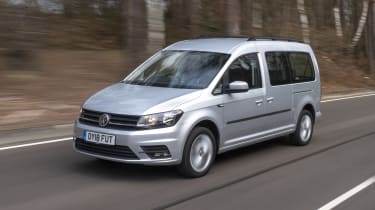 For: Good boot space, rides and handles better than Citroen, solid cabin constructionAgainst: Not as roomy as the Berlingo for passengers, isn’t as versatile overall

Although the Berlingo uses a platform that is mainly reserved for cars, the Caddy isn’t based on Volkswagen’s latest MQB modular architecture. Yet it’s better to drive than the Citroen, with a plusher ride that’s teamed with more control. People carriers are about practicality, however, and the Caddy can’t quite compare with the Berlingo here.

There’s a good level of space on offer, but it’s not quite as roomy as the Citroen inside. Certainly it’s tighter in the third row, with less legroom and a little less headroom. In the second row the VW feels more like a car than its van-like rival, but this also means it’s also a little more claustrophobic if you’re carrying five people or more. 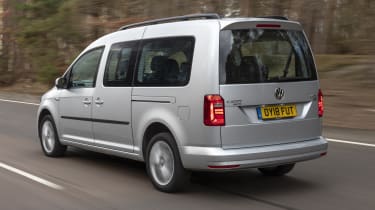 However, there’s still a good level of versatility because, as with the Citroen, the VW’s middle-row seats slide and fold independently so you can tailor the configuration to just how you need it. The middle row can be folded and the whole bench pivoted up after this to create additional space. Access to the second and third rows is easy via the sliding doors, but it’s not quite as simple to clamber through the boot to the back row in the VW, which might be the easier option for kids.

The Caddy claws back ground for boot space, though. The more cramped third row actually means a bigger load bay in seven-seat form, at 530 litres. This increases to 1,650 litres if you remove the two rear seats, but at 1,538 litres form the Citroen in this configuration, the gap is less. With just the front seats in place, the Caddy can hold up to 4,130 litres. Citroen’s 2,693-litre space in this configuration was measured in a different way, and in reality is almost as big. Still, it’s likely that people-carrying and flexibility will be buyers’ top priorities, and these are where the Berlingo shines.

The Caddy’s cabin design is familiar and quality is solid, with robust plastics to match the Citroen’s. The VW doesn’t offer quite as much kit. You get a much smaller 6.33-inch screen, which looks old compared with the Berlingo’s more modern unit. Cruise control and air-conditioning are included, too, but many features that you might want are optional. Tech that is fitted works well, while the level of safety equipment on offer is what you’d expect from a car aimed at busy families. 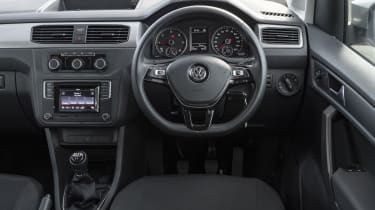 The Caddy also drives well. Its larger 2.0-litre TDI engine produces 101bhp and 250Nm, which is almost the same as the Citroen’s 1.5-litre unit, but it was faster from 0-60mph, taking 13.3 seconds. While the VW was quicker at full throttle, it lacked the Citroen’s flexibility, as our in-gear times proved. The French car was quicker in every in-gear test. 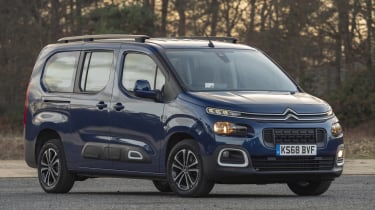 Cost and versatility rule here and the Berlingo banks another win thanks to its strength in both areas. It’s slightly cheaper than the Caddy but has more standard kit, while it’ll be more cost-effective to run and boasts a more practical cabin, even if it lacks a little of the VW’s load space. 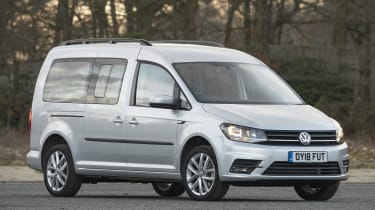 The Volkswagen is the much better machine to drive, but while the Caddy can compete with the Berlingo in certain areas – performance, comfort and boot space, for example – it’s ultimately not as usable, not as well equipped and not as hi-tech as our French favourite.