It's tough being a caddy. While the golf star hogs the limelight, the bag carrier never gets any credit. So what sort of 'Caddy Life' is this new Volkswagen destined for? 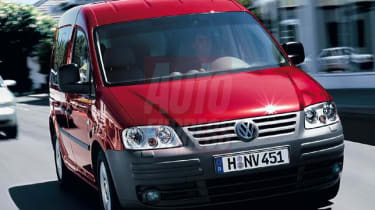 While very practical and better quality than rivals, VW will need to market the Caddy carefully to a budget-conscious audience. It's huge inside, and the seven-seater will be a useful alternative to a big MPV. However, the new model is only sold through VW van dealers, which will limit availability.

It's tough being a caddy. While the golf star hogs the limelight, the bag carrier never gets any credit. So what sort of 'Caddy Life' is this new Volkswagen destined for? Is it a cut-price Golf with a Touran's space - or just a van with a steep handicap?

The Touran-influenced shape looks less van-like than some rivals, while the stylish dash, although constructed from hard plastics, features chrome-ringed dials and an excellent stereo.

The front seats are straight from the Golf and add to the classy feel of the interior, while twin sliding doors and a huge cabin - it's bigger than key rivals' all-round - make it extremely practical. Occupants sit high, and middle row passengers have lots of head and legroom, while being treated to neat touches like heater vents, a 12V power socket and sliding side windows. Five seats will be fitted as standard, with seven seats offered for an estimated £500 premium.

Engines are yet to be confirmed for the UK, but the 1.9-litre TDI is likely to be the best seller. Compared to the normally aspirated SDI diesel and 1.6-litre petrol units, it's punchy, refined and economical.

On-road manners are very Golf-like and are dominated by superb ride quality. It's smooth, well controlled and not at all harsh. And unlike some van-based MPVs, bumps don't send a noisy shudder through the cabin either. The body rolls through corners, but not alarmingly so, and the steering is light and accurate. It may not be particularly exciting, but it's very easy to drive, although the steep angle of the bonnet can limit visibility for parking.

VW estimates an £11,500 starting price, with the 1.9-litre TDI costing around £1,000 extra. That's still cheaper than a Golf or the Mercedes Vaneo - but it's far more than van-based offerings from Citroen and Renault. It's well equipped, though, with a CD player, electric windows and remote locking, plus ABS brakes and four airbags.