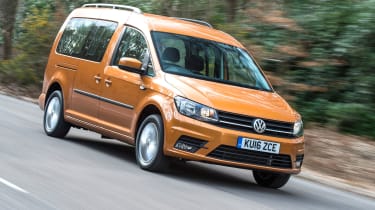 If space and simplicity are your priorities, then the Caddy Maxi Life will definitely appeal. In diesel form it’s one of the better van-based MPVs, with excellent passenger space for the price. In top-spec petrol form, however, it’s harder to recommend, while a Ford Grand Tourneo Connect is better to drive. You don’t have to pay much more for a proper MPV, either.

Families who require an exceptional amount of space often look towards van-based people carriers. Volkswagen’s Caddy Life has long been a staple of that niche market, and this seven-seat Maxi is the fourth-generation petrol model.

The Caddy Life used to be diesel-only, but customer demand has meant three turbo petrols have been added to the range. The larger Maxi is only available with a 1.0 or 1.4-litre TSI, while the smaller five-seater adds a 1.2. While that’s not a whole lot of choice, rivals like the Ford Grand Tourneo Connect don’t offer any petrol models at all. 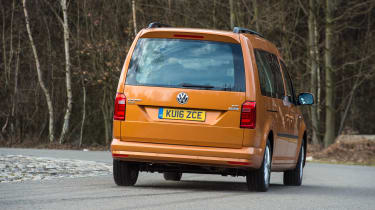 The 124bhp 1.4-litre turbo produces enough shove to give the Caddy a decent turn of pace for a seven-seat van. The 0-62mph sprint is dispatched in 10.9 seconds, making it feel perky off the line, but you need more revs out of town than you might expect. And while the engine is quiet at low revs, past 5,000rpm, it starts to sound thrashy. Our test car was also fitted with a seven-speed DSG gearbox, which shifts smoothly, but occasionally gets caught out at junctions or at lower speeds.

As you’d expect from the van-like exterior styling, the Caddy isn’t involving to drive. It’s softly sprung, which makes for a generally comfortable ride, but sharp bumps expose the commercial roots with hard thumps through the body. The steering is accurate, but there’s lots of body lean in bends. On the motorway it’s refined for a van, with only a bit of wind rustle disturbing the peace. 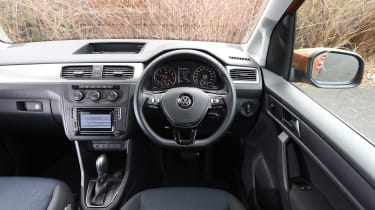 The regular Caddy isn’t exactly cramped inside, but an extra £2,862 gets you this Maxi model, with an additional 470mm of length and two extra seats, offering plenty of space for adults. That means a massive 3,370-litre boot with the seats taken out.

Access is great, thanks to the sliding rear doors, but the seats aren’t very flexible: the mechanism to fold the middle row is stiff and they don’t go flat to the floor. With a few options like sat-nav and park assist, our test car cost at more than £25,000, while the solid but workmanlike interior feels a touch basic next to proper MPVs.