Practical and comfortable, a new wave of technology means the Volkswagen Caddy is more competitive than ever 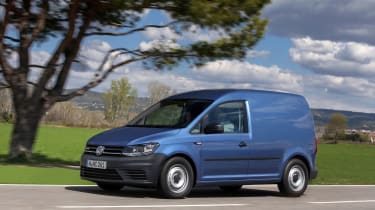 The Volkswagen Caddy is a compact sized panel van that competes for trade with a bunch of very respectable rivals including the Fiat Doblo Cargo, Ford Transit Connect and Mercedes Citan.

The popular Volkswagen commercial has been on the market in its current guise since 2015, and although it’s very similar to the previous generation, the Caddy for sale today features an array of technology advancements including new safety kit and updated infotainment choices.

As you would expect, the VW Caddy range comprises a wide range of bodystyles and formats, with longer wheelbase versions badged as the Caddy Maxi. You can buy the Caddy as a window van, and if you want a utilitarian people mover there’s a choice of the five-seater Caddy Combi and the plusher five- or seven-seat Caddy Life which feels more like a proper MPV.

There’s a decent range of diesel and petrol engines in the Caddy line, all of which meet Euro 6 emissions standards. The diesel line-up comprises three versions of a 2.0 TDI engine making 74bhp, 101bhp and 148bhp respectively. The two more powerful units can be matched with a dual-clutch automated gearbox, while the entry level diesel is manual only. The story is repeated with a trio of 1.0 litre and 1.4-litre petrols, with auto an option on the bigger engine only.

There’s a trio of Caddy trim levels too, and the range kicks off with the Caddy Startline which features Front Assist with City Emergency Braking, a five-inch touchscreen for the DAB radio/CD player, electric windows and mirrors and a single sliding side door. Move up to the Caddy Trendline and you get climate control, cruise, a height adjustable driver seats and body colour bumpers.

The range-topping Caddy Highline comes with VW’s Discover Media Navigation system, fog lamps, auto headlamps and alloy wheels. If the environment is more of an issue for your company, then the Bluemotion option delivers increased efficiency from tyres with lower roll resistance, start/stop and regenerative braking.

Although the current VW Caddy looks a lot like its predecessor and is built on the same platform, it’s passenger car-derived running gear and technology has done a lot to keep the van at the head of the pack.

The Caddy van engine range is all Euro 6, and it’s Volkswagen’s SCR (Selective Catalytic Reduction) technology that gets the Caddy over the line for NOx emissions by injecting AdBlue urea solution into the exhaust gasses. Economy figures are good with a spread of 55.4mpg to 61.4mpg for diesel models, and 47.1mpg to 53.3mpg for the petrols.

If you want to go even greener, the BlueMotion derivative uses aerodynamic tweaks, revised gear ratios, low rolling resistance tyres and an ECU remap to deliver combined cycle CO2 emissions of 104g/km and over 70mpg.

Two wheelbase options (2,681mm in the standard van and 3,006mm in the Maxi) produce load volumes of 3.2m3 or 4.2m3 in the Caddy. There’s no high roof option so the van can’t quite match the biggest cargo spaces in the compact van class but a maximum payload of 857kg is competitive.

The load length is 1,779mm and access at the rear is via either asymmetrically split side hinged rear doors or a lifting tailgate. A sliding side door with a 700mm opening is also standard and a second can be added on the opposite flank as an option. 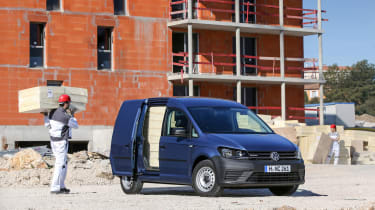 The side-hinged rear doors open to 90 degrees, but flick the latches and they’ll swing out to 180 degrees for better access. Objects of up to 1,172mm can then be slid in between the wheelarches. Further options include a ladder flap in the roof and a ‘Flex Seat’ on the passenger side that folds down and drops into the floor to increase the potential load length to 3,000mm on the standard van.

The Caddy seems reassuringly sturdy around the loading bay, with chunky door handles, half height interior panelling and wide sill protectors made of tough plastic. The load floor has six lashing eyes and you get another two on the longer Maxi model.

Standard safety equipment on the Caddy is generous and the options list harbours an impressive package of driver aids.

Side and curtain airbags are available in addition to the driver and passenger airbags that come as standard. Then there’s the Front Assist technology that monitors the distance to obstacles at the front of the vehicle and sounds an audible warning if they become ‘critical’. The system also primes the brakes for an emergency stop if it thinks a collision could be imminent. Emergency City Braking will actually apply the brakes at low speeds to prevent, or lessen the impact of, a collision.

In addition to this, Caddy customers can specify Adaptive Cruise Control, which maintains a set speed and a set distance to the car in front, Light Assist, which dips the main beam to avoid dazzling drivers of oncoming traffic, and Driver Alert, which detects changes in driving style that could indicate tiredness and sounds a warning. 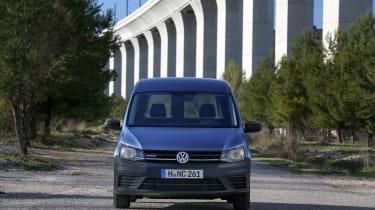 The entry-level 74bhp option takes a laborious 16.4s to reach 62mph and that’s without any cargo on board. This might be an explanation as to why 80% of Caddy buyers take the mid-spec 101bhp unit. This engine does the 0-62mph blast in a reasonable 12s and felt usefully lively in the unlaiden vans we tested. Throttle response is particularly sharp and although engine noise is prevalent at low speeds, it settles down nicely on the motorway.

For most there will be no real need to step up to the 148bhp range topper but rest assured, it’s a serious hunk of engine to fit to a compact van. The difference over the 101bhp unit isn’t really felt at low speeds but in the middle and upper parts of the rev range there’s some serious muscle. It makes the Caddy one of the few vans in this class to dip under the 10s barrier for the 0-62mph sprint. Its time of 9.2s is rapid for a commercial vehicle.

The Caddy van achieves a composed, planted feel on the road with direct steering, a decent gear change and well-judged pedal weights. It doesn’t feel as light on its feet as a Fiat Doblo or a Ford Transit Connect but it’s a classier proposition than either in terms of its all-round driving experience.

The suspension deals with rough road surfaces very well, smoothing out the bumps and achieving a stable feel at speed even without a load on board. The rear end copes less competently with larger bumps, dropping off speed humps and into potholes a little too harshly but some cargo weight on that rear axle should help this. Volkswagen offers its impressive DSG twin clutch automatic on some models and it's a good option for buyers spending most of their time in urban traffic.

You won’t find a better interior in a compact van than the Volkswagen Caddy’s. Build quality is hard to fault and Volkswagen’s usual clear, fuss free design is in evidence. The latest Caddy doesn’t move the game on dramatically from the Mk3 version but the touchscreen infotainment system now fitted to higher end models looks great and couldn’t be much easier to use. 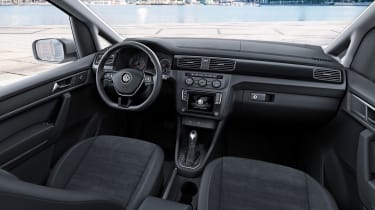 The driving position is good with a firm, comfortable seat and loads of adjustment on the steering column. On the passenger side things feel a little more cramped with the thick door insert limiting elbow room on the right and the centre console interfering with your left knee.

Storage is very good, with an array of locations to stow items including a large dash top holder for A4 paperwork, wide door pockets, a covered glovebox and a large overhead shelf. Additional storage under the seats is available as an option. 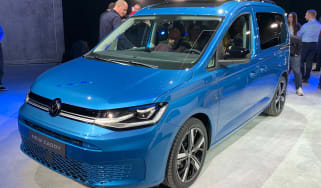 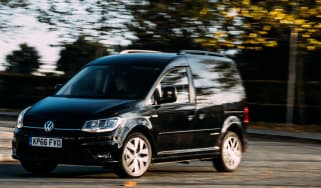 Volkswagen has revealed another Black Edition version of its Caddy, offering exclusive touches and extra kit at a premium
Van of the Year 2016: Volkswagen Transporter 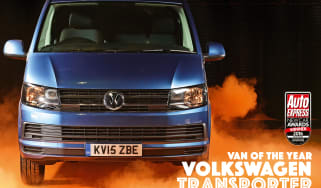 Van of the Year 2016: Volkswagen Transporter

The Volkswagen Transporter is the 2016 Auto Express Van of the Year, with the Ford Transit and Volkswagen Caddy commended
VW Caravelle gets 2.0-litre TSI power while Caddy goes petrol too 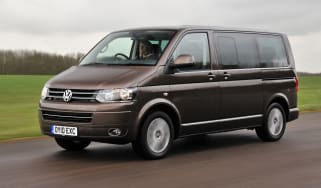 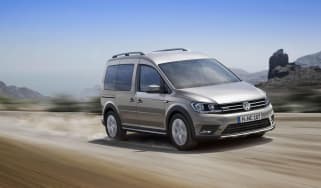 VW Caddy Alltrack goes where few vans have gone before 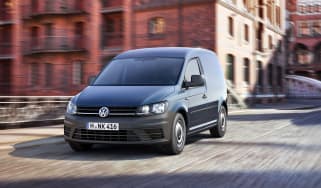 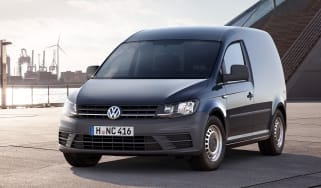 New 2015 VW Caddy gets safer, greener and prettier too 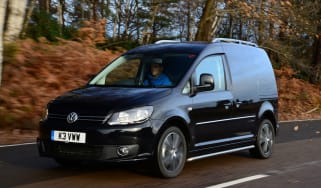 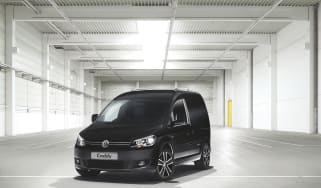 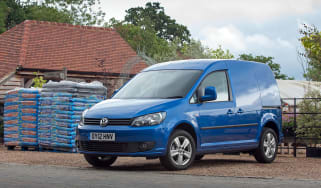 The VW Caddy is one of the best small vans on the market, with a choice of three bodystyles, plus a range of low-emission models
Skip to HeaderSkip to Content