The new Citroen Berlingo ticks the practicality boxes, but how does it stack up against the Peugeot Rifter and Vauxhall Combo Life? 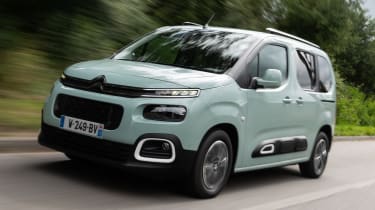 If you need a practical, spacious, no-frills people mover, there's little that fits the bill as capably as the Citroen Berlingo. Well, almost. Minor (but positive) styling changes aside, Citroen’s van-based MPV is very similar overall to the Vauxhall and Peugeot equivalents that share its platform. With official prices of each member of the trio to be fully confirmed, we’ll have to wait and see which of the three offers the best value for money, because that’ll be the one to have.

This is the new Berlingo, the Citroen one in a trio of van-like people carriers on offer from the the PSA group. It’s joined by its sister vehicles, the Peugeot Rifter and the Vauxhall Combo Life and with only specification and styling details separating the three, choosing between them could be difficult.

It’s Citroen that can take credit for kicking-off the no-frills MPV class all the way back in 1996, though. Now in its third generation, the Berlingo MPV has lost the ‘Multispace’ part of its name but gains new styling, inside and out, plus significantly more equipment and safety tech.

But it’s practicality where the Citroen Berlingo has always shone, and the good news is that it’s now more useful than ever. The glut of interior cubby spaces totals a whopping 186 litres, and they’re topped off (literally) by a roof storage system. Citroen calls it Modutop, and it’s got an airline-style locker at the back, with a long, translucent shelf running ahead of it through the centre of the cabin. Paired with an panoramic glass roof, it’s an option which costs €750 on French spec cars. If priced equivalently in the UK, it seems well worth having. 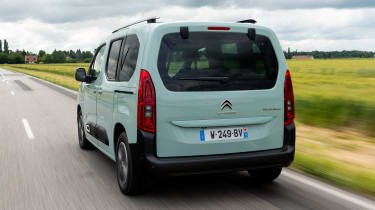 Neat touches elsewhere include huge sliding doors that make for easy passenger access, and space for three child seats side-by-side. There are two body sizes to choose from: both M and XL versions (the latter, due later in the year, is 35cm longer) will be available with seven seats. Lack of under-thigh support aside, the third row seating is good enough for an average-sized adult - at least in the XL model we sat in.

The boot is vast, too. The M model’s 775-litre load space equates to 100 litres more than the old Berlingo Multispace in standard guise, and the XL gets a faintly ridiculous 1,050 litres. Folding the seats takes a simple flick of levers in the boot or on the seats themselves, and all three individual chairs drop into the floor for a near-level load area. If fitted, the sixth and seventh seats are removable altogether.

The front passenger seat folds flat, which, according to Citroen, means your Berlingo can hold a whitewater kayak. For those who don’t use small water vessels as a unit of measurement, the M can take 2.7-metre-long objects and the XL has 3.05-metre load length. The boot door is huge, which is great for loading but a pain in tight spaces, where the glass hatch that can open separately comes into its own. It’s a standard feature on the Flair - the higher of two trim levels - and an option well worth picking on the Feel.

A super-spacious, boxy shape like the Berlingo’s doesn’t lend itself to heart-stopping styling, but Citroen’s family look of two-tier headlights, a black A-pillar, and airbumps on the doors give the Berlingo a certain charm that its Vauxhall and Peugeot cousins lack. Like that pair, the Berlingo uses a platform that mixes PSA’s EMP2 front end - used by the the C5 Aircross and Peugeot 3008, among others - with the second-generation Berlingo’s architecture at the back.

But what’s it like to drive? Well, most of the time, the new Berlingo feels more like a car than it does a van. The steering is light, the turning circle is tight and, while the high centre of gravity makes itself felt during hard cornering, body roll is controlled well enough. There's decent grip, too. The ride is smooth enough, though the harshest bumps vibrate around the cabin, and there’s quite a lot of wind noise - particularly around the bulky door mirrors. 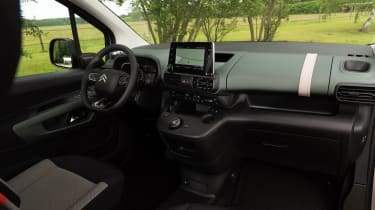 From launch, there’s two engines to choose from. The 108bhp 1.2 petrol is a fantastic unit in smaller Citroens, but the 1.5 diesel’s extra torque - 300Nm versus the petrol’s 205Nm  - makes much more sense in a car that might seat seven. The diesel gets a slick eight-speed auto gearbox, which suits the car well. For now, petrol buyers have to make do with a six-speed manual. It’s a bit clunky to use, but there is an auto for that car coming in 2019.

The interior design is a vast step forward over the old Berlingo model and, like the advanced kit that’s available, seems distinctly un-van like. Available tech includes a colour head-up display, an eight-inch touchscreen infotainment system (complete with navigation, Apple CarPlay and Android Auto), wireless smartphone charging and a reversing camera with with a bird’s eye-view mode.