If there's one thing that the French know how to do well, it's making something quite dull into an item of desire. Alongside pain au chocolat, cheese and maids, this is especially true of hot hatches. 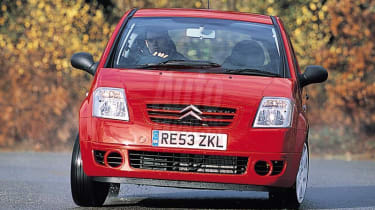 British buyers love a racy hatchback, but many will have reservations about the C2 VTR's SensoDrive only gearbox. This limited-run GT edition, which has a manual, is the solution. The steering may be over-assisted, but the handling is superb and the GT offers excellent value for money with a year's free insurance.

If there's one thing that the French know how to do well, it's making something quite dull into an item of desire. Alongside pain au chocolat, cheese and maids, this is especially true of hot hatches.

There's the iconic Peugeot 205 GTi, the thrilling 106 and 306 Rallye and the top-selling Citroen Saxo VTR and VTS. Citroen is hoping to rekindle the UK's enthusiasm for its feisty superminis with this rally homologation special GT edition of its C2, and Auto Express was first to see whether it has what it takes to join the hot hatch hall of fame.

So where does the new model fit into the range? The C2 VTR has al-ready been launched in the UK, but the GT has a few subtle, but crucial, differences. The most important is the gearbox. Citroen is adamant that the standard VTR will only ever be produced with the semi-automatic Senso-Drive 'box. That's not necessarily a bad thing, but there are many hot hatch fans who would prefer a traditional manual - hence the GT comes with a third pedal and a gearstick.

With its roots in rallying, the GT also weighs marginally less than other models in the range, with no spare wheel, a smaller washer bottle and a few omissions from the equipment list. In true motorsport special fashion, there's also a numbered plaque by the gearstick telling you which of the 2,250 examples you are driving. Interestingly, the entire production run is destined for the UK, simply because we Brits are so keen on fast hatchbacks! Under the bonnet, Citroen has left the VTR's 1.6-litre 110bhp engine untouched, but performance is improved thanks to the loss of weight and the manual gearbox.

The 0-62mph time of 9.5 seconds is 1.4 seconds quicker than the VTR's, and breaks through the 10-second barrier which is so important to hot hatch fans, without worrying the insurance companies too much.

Young buyers, meanwhile, will be pleased to learn that premiums will be kept down by a class-leading placement in insurance group six. Fuel ec-onomy of 42.8mpg and CO2 emissions of 158g/km will also help to keep bills down. This doesn't mean that the car is no fun, though. Citroen has taken the more difficult route to driver enjoyment, relying on chassis dynamics rather than brute horsepower, but thankfully it's paid off. While the weight reduction is minimal, the extra surge off the line offered from the manual 'box and the well matched ratios make the GT feel nippy, while the handling is superb.

It's not as extreme or as lively as the Saxo, but this C2 turns in like a mid-engined sports car and suffers virtually no body roll. Our only complaint concerns the variable assistance power-steering, which spoils the dri-ver's fun thanks to its over-assisted feel and lack of feedback.

But getting the handling right is only half the battle - styling and im-age are equally important to the GT's youthful target market. While the most striking features are the 16-inch white alloys, the rally-car inspired front end is also unique to the GT. A neat roof spoiler finishes the look. Inside, there's carbon fibre effect material around the dials, and unusual translucent trim on the gearstick and door. The VTR's sport seats are also fitted, and they provide plenty of support when cornering, without being too uncomfortable.

Priced at £10,495, the GT is £500 cheaper than the VTR, and comes with ABS and Electronic Brakeforce Distribution, as well as Emergency Brake Assist. Rivals from Ford and MG are available for less, but Citroen is also offering one year's free insurance for 21-80-year-olds before 31 January. Looks like the French have produced another hot hatch to be proud of.