After weeks of trying, I've finally figured out where the Citroen C2 VTS is most at home. Despite its city car credentials, it's really a B-road specialist. This is a relief, as intensive town driving and the odd motorway blast had left me wondering where the car's appeal lay. 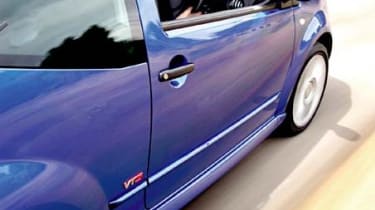 After weeks of trying, I've finally figured out where the Citroen C2 VTS is most at home. Despite its city car credentials, it's really a B-road specialist. This is a relief, as intensive town driving and the odd motorway blast had left me wondering where the car's appeal lay.

I've been using the Citroen for my 16-mile commute through the stop-start traffic of south London. The poorly surfaced roads are bad news for the VTS's hard suspension, delivering a crashy, unforgiving ride, while smooth progress is hampered by the all-or-nothing brakes. It's no better on multi-lane roads, either, as the firm set-up and low gearing make it a restless and noisy companion.

However, an enlightening drive on a good rural B-road revealed the C2's natural habitat. There, it handles sharply with minimal body roll. Its performance isn't electrifying, but extracting all 125bhp from the 1.6-litre powerplant is good fun.

My rush hour crawl has given me plenty of time to admire the cabin, however. By city car standards it's not bad, although there are a few gripes. Firstly, the limited reach adjustment of the steering wheel means taller drivers have to accept a compromised seating position. I'm not a fan of the plastic door pulls, either, as they look unfinished. Finally, while the in-dash CD changer is excellent, the stereo has fiddly push-button volume controls. Admittedly, there are auxiliary switches on the stalks, but the radio-mounted items irritate.

Since the previous report, the VTS has taken part in our Greatest Drives shoot-out in Wales, and after many hot laps of the Anglesey circuit, the front tyres needed changing. But the low-profile rubber is rare, and tracking down replacements was tricky.

In the end, Vulcaniza Tyre Centre in Clapham had to order them specially - and charged £210.05 for the privilege. It looks as if we'll be going back soon, because now there's a nail in one of the rears! A trip to a Citroen dealer also beckons, as a stone has left a hole in one of the foglight lenses.

Once both problems are fixed, the C2 will be back on form. It's just a shame there are no twisty B-roads on my way home from central London...

Sorry Citroen, but like Ross, I think our C2 VTS is uncomfortable around town and noisy on the motorway. Worse still, the interior doesn't feel particularly well put together, either. And although I agree that the hot hatch is good fun on a twisty B-road - where you can start to enjoy the nimble handling - the Ford Fiesta Zetec S is a much better driver's car, and would be my choice every time.Sam Hardy, motoring writer