With an engine that stops running when it comes to a halt, will the new Citroen C2 be a trend starter or stopper? 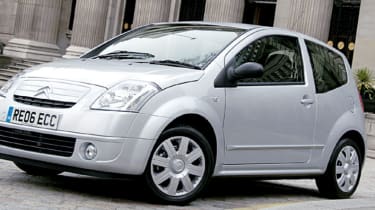 We like the idea of Stop & Start - after all, there is no point in having the engine running when the vehicle is stationary. But while you don't not-ice the stopping and start- ing, there are no benefits in fuel economy to be made. What's more, the SensoDrive transmission is jerky and hampers progress. We think a 1.4 HDi manual would be a better bet.

Being eco-friendly is all about simple actions - such as turning off the tap while you are cleaning your teeth, or switching off lightbulbs in empty rooms. So when it comes to cars, what could be better - or easier - than an engine which stops running when it's not being used?

Citroen's C2 Stop & Start is a super-mini with some rather clever technology. Its motor is turned off when the vehicle comes to a halt in traffic, before restarting as soon as the driver's foot returns to the accelerator.

Available on the 90bhp 1.4-litre pet-rol model, the system could cut fuel bills by 15 per cent and slash CO2 emissions by 10 per cent. It sounds like the future, but is this C2 a trend starter - or stopper? We took it for a drive to find out.

Of course, Stop & Start is nothing new. More than 10 years ago, an experimental VW Golf was given the technology, while Toyota's hybrid Prius operates in the same way. What's more, a C3 Stop & Start is already available. So, is the C2 the best example yet? Well, not quite - although that is not the fault of the technology, as you barely notice the engine stopping and restarting in traffic. However, it is necessary to have your foot on the brake pedal at a standstill - other-wise the system won't work.

What you do have to contend with is the SensoDrive gearbox - and it's as flawed as ever. Auto mode is jerky, while using the steering wheel-mounted paddles is little better. And with no clutch pedal, manoeuvring on hills or in car parks is tricky. Given that the point of Stop & Start is that it makes most sense in cities, it seems ludicrous to mate the technology to a box which makes urban driving such hard work.

Neither do the figures add up. At £10,690, the C2 Stop & Start costs about the same as a 1.4 HDi SX. Even if you did cut your fuel bill by 15 per cent in town, this would improve the urban average by only around 5mpg to 41mpg - in contrast, the diesel returns 55mpg. Then there is the C2's over-sensitive brakes and patchy build. At least it's fun to drive on the open road, though, and it still looks cheeky.

There's no doubt that Stop & Start is a great idea, but there are too many flaws at present. Citroen may well solve these in future, yet for now, buyers - including eco-friendly ones - should look towards a regular diesel variant.