After walking through the arrivals lounge at the end of a long flight, all you want is something quiet and relaxing to get you home. Similarly, when your alarm goes off at an ungodly hour, you appreciate a cosseting ride. 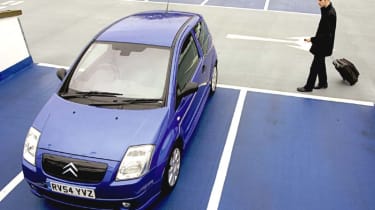 After walking through the arrivals lounge at the end of a long flight, all you want is something quiet and relaxing to get you home. Similarly, when your alarm goes off at an ungodly hour, you appreciate a cosseting ride.

However, as custodian of Auto Express's long-term C2 VTS, I regularly find myself striding bleary- eyed across a deserted car park towards the very opposite of calm and gentle motoring. With an unforgiving ride and noisy motorway gait, our French hot hatch does a fine job of keeping its occupants awake. It could be that I'm getting old, as I'm struggling to bond with the C2, although the number of dissenting voices in the office leads me to think it's not my advancing years at fault - the fact is, the Citroen is compromised.

Pin-sharp handling and a zesty 1.6-litre engine mean the hatchback is fun to use on deserted country roads, but the pay-off when you're taking things a little easier is poor ride and refinement - even by hot hatch standards.

I admit I have grown to like the C2's chunky styling, which undoubtedly looks best in the Poseidon Blue of our car. The boot is also big enough to swallow the weekly shop or a suitcase - but elsewhere the cabin isn't ageing well. The hard plastics on the door panels and dashboard mark easily and the metal gearknob looks as though it's been used in a game of golf.

Fuel economy is also a concern, as the C2 has registered only 27mpg over the last 2,000 miles - which brings the overall average figure down to 32.4mpg. The twice-daily crawl through London's gridlock is to blame, as is the fact the car has hardly been given a chance to stretch its legs of late. But even when it does, low gearing means long trips are unlikely to yield anything better than 30mpg.

Since our last report, we've also paid a visit to the dealer to have a replacement foglamp fitted. The nearside unit had been holed on a motorway trip, and Citroen dealer Lovekyn of Ewell, Surrey, carried out the work quickly and efficiently for a reasonable £56.42. It also removed short nails from each of the rear tyres although, as luck would have it, neither required a replacement. At least the money we've saved will pay for a few more trips to the long-stay car park at Heathrow.

Despite the budget price, I feel, like Ross, that the C2's driving experience could be better. The steering is too light and controls need more feel. Trendy looks will appeal to its young target market, though, especially our car's Poseidon Blue paintwork. The dash-mounted Cd multichanger is also great on long journeys.Marc Mustard, staff writer