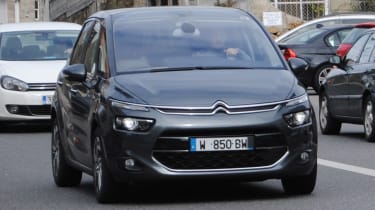 This is the all-new Citroen C4 Picasso, spied completely undisguised ahead of its debut in concept form at the Geneva Motor Show next month.

Our pictures show the new five-seat C4 Picasso MPV. The new car is expected to feature similar dimensions as the current car, which measures 4,470mm long, 1,830 tall and 1,680 wide. However, better interior packaging should mean more space and a bigger boot capacity than the current car's 500 litres.

However, while it retains similar proportions to the current C4 Picasso, the all-new car does get a bold new nose.

Dominated by Citroen’s latest double chevron grille, the C4 now features two pairs of headlamp clusters,  similar in idea to the Nissan Juke. Slim roof pillars feature all round, and the side glass now has a chunky chrome frame running round its edge.

At the rear, the C4 Picasso’s design is much more sober, with a relatively simple bootlid design and pair of Volkswagen Golf-style LED tail-lights.

The C4 Picasso will be the first production car to use the new PSA EMP2 platform that will help shed 70kg from the current car’s 1,680kg weight. Like the new Peugeot 308, which will also be built on the EMP2 platform, the C4 Picasso will feature up to a 22 per cent improvement in CO2 emissions, thanks to a suite of measures aimed at improving economy. This will take the Airdream model below 100g/km.

Citroen claims that work to reduce friction in the drivetrain will save around 4g/km, with a stop-start-equipped engine line-up accounting for a 4g/km saving, while a new electric power steering system saves 2.5g.km.

The C4 Picasso will also feature the new PSA touchscreen infotainment system that will be used on all cars underpinned by the EMP2 platform.

Welcome to our Geneva Motor Show hub page, scroll down for all our Geneva content...
Volkswagen Sharan scores four stars in crash test 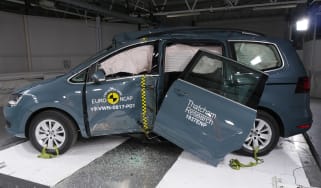