At last, Citroen has a family car to be proud of. 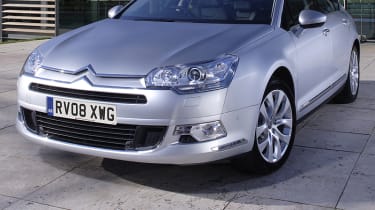 Driving You’ll find yourself immediately relaxed by the latest Citroen C5, as it’s so soothing to drive. The engines never emit more than a distant hum, and power delivery of the HDi diesels is relaxed. Performance is a secondary consideration – which is just as well, as the heavy saloon isn’t that fast, even with 2.2-litre and 2.7-litre V6 diesels fitted. Nevertheless, the Citroen’s suspension gives it a unique feel, particularly the gas set-up of costlier variants, which is focused entirely on comfort. However, there’s no hint of athletic ability, with vague steering and soft suspension. At least roll is limited and grip is good. No, the Citroen’s most at home on motorways, where it seems to glide along. Suspension is less able to deal with sharp ridges and potholes, but overall it’s very relaxing.

Marketplace Talk about a transformation. This C5 is as striking as its predecessor was dowdy. This is vital, though, as buyers in this sector aspire to German brands. Citroen needed to work hard to attract them – and has made the C5 into a handsome family car. The pronounced creases and bonnet ridges are especially effective. It’s a little angle-sensitive, though, while strong body colours and large-diameter alloys are needed to disguise its sheer size. The French model is longer than a Ford Mondeo, and almost as wide. Unlike the first-generation variant, the current C5 is a saloon, with a Tourer estate model available in the summer of 2008. Trims follow the familiar pattern of SX, VTR+ and Exclusive, with the engine range majoring on HDi diesels – 1.6-litre, 2.0-litre, 2.2-litre and 2.7-litre V6 versions are available. Petrol buyers have only the old-fashioned 1.8-litre and 2.0-litre petrol units to choose from, but in time these will be replaced. Rivals include the Mazda 6, Ford Mondeo, Renault Laguna and Volkswagen Passat, in what is a tightly-fought sector mainly populated by fleet users.

Owning The interior is quirky, with an individual and interesting design, but the promise of German build quality hasn’t quite materialised. We like the fixed-hub steering wheel and well-shaped seats, but all the cubbies are too small, and the materials don’t seem any more tactile or easy on they eye than those in the C4 hatch. Passenger space is also limited, with less legroom than a Ford Mondeo, plus tight head and shoulder room. A big boot opening is better, though, with the distinctive curved rear window aiding access to lots of floor space. And the C5 also has value on its side, with a lengthy standard kit list, while long-term running costs are manageable thanks to OK fuel economy (though its weight means real-world returns are not quite as good as they could be) and a big improvement in retained values.