Restyled DS 3 hatch available to order on 5th of Feb, with hot new Performance model from £20,495

DS has announced full pricing and spec of its newly revamped DS 3 supermini. The MINI rival is on sale this Friday through Citroen dealers, with the range kicking off from £13,995 or £16,295 for the Cabrio.

The range now consists of five trim levels (including the hot new Performance spec), with entry-level Chic coming in at just under £14k with the 82bhp 1.2-litre PureTech turbo petrol engine. Other trims available are Elegance, Prestige and flagship Ultra Prestige.

After an enforced separation of the upmarket DS sub-brand from Citroen in 2014, the popular DS 3 has had to make do with little more than the chevron badges scraped off. But the company has now given it a proper facelift to bring it into line with the larger DS 4 and DS 5.

Considering that 390,000 examples of the posh supermini have found homes globally since launch in 2010, you'd have thought this would have been a priority over the family car and compact exec. But the changes here are welcome all the same. 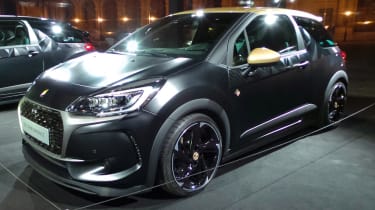 The most noticeable updates are at the front, where a DS-badged hexagonal grille finally replaces the old Citroen 'double chevron' design. Higher-spec models get smarter headlights that combine LEDs and xenons, with three jewel-like LED clusters for a distinctive look.

LED indicators and foglamps complete the front end redesign, while from the side, only new alloy wheel designs give the game away. At the back, it's a case of subtly reprofiled lights. Even more scope for personalisation has been added, with 10 roof decals and four roof finishes for the DS 3 Cabrio among the three million-strong colour and trim combinations.

The interior has also been given a lift, with new trims including the 'watch-strap' leather from the DS 4 and DS 5. Extra dash colour combinations also help boost the upmarket look. In-car tech has been improved, with an updated seven-inch touchscreen featuring Apple CarPlay and MirrorLink smartphone connectivity. A new DS Connect Box option includes an SOS and Assistance Pack and a remote tracking system, while safety tech such as Active City Braking added across the range. 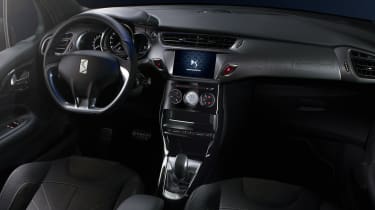 The engine range remains the same, so buyers can still take their pick from the 1.2-litre PureTech three-cylinder turbo petrol in three states of tune, plus two four-cylinder THP turbo petrols and two BlueHDi diesels. But there is a sporty new addition. The DS 3 Racing - previously a limited edition - returns in hatchback and Cabrio forms, with a new name: DS Performance. 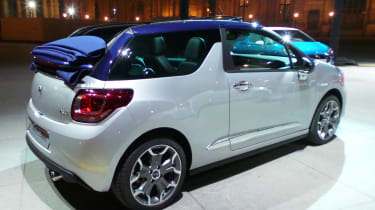 This engine ensures the DS Performance easily outguns the Ford Fiesta ST (which has 177bhp and emits 139g/km). And while DS has yet to reveal any performance figures, we can expect them to be broadly the same as for the Racing, which sprinted from 0-62mph in 6.5 seconds and hit a top speed of 146mph. There's a six-speed manual gearbox and it even comes with a Torsen limited-slip differential as standard.

Do you think the DS 3 looks better without the Citroen grille on the front? Let us know in the comments below...