The Materia looks unique, but the way it drives lets it down. 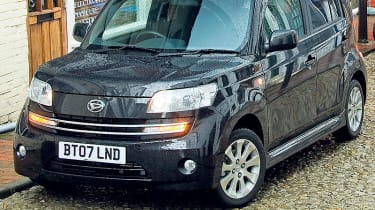 Driving The Materia’s 1.5-litre engine is lacking in personality, though it delivers strong performance. 103bhp helps it dash to 60mph in 10.8 seconds, and it feels responsive in gear. This is partly due to a short top gear though, which makes it sit higher in the revs on the motorway. The suspension has a similarly sporty bias, too; firm damping gives a hard edge to the ride. This helps contain body roll, dispute the Materia’s tall stance, although under hard cornering the anti-roll bar can’t stop the body heaving and unloading the opposite suspension enough for the tyre to lose traction. Add in steering that suffers kickback over bumpy surfaces, and the Materia isn’t as composed or as comfortable as it could be. However, it never feels unstable, and the brakes are good.

Marketplace With its strange blend of micro car boxiness, racy bodykit and tinted windows, there’s no mistaking the Materia. Yet look beyond the unique styling, and the Daihatsu is pretty closely matched to rivals including the Nissan Note, Renault Modus and Mitsubishi Colt five-door. It isn’t particularly long, but it is quite wide and very tall. It’s pretty well equipped, which is good as there’s just a single trim, and the only engine option is the 1.5-litre petrol. Apparently, the Materia is a big hit on the neon-lit streets of Tokyo, though it does face stiff competition in the supermini-MPV sector over here – models such as the Nissan Note, Vauxhall Meriva and Renault Modus.

Owning Thanks to the tall roofline, there’s a feeling of real space inside, particularly in the rear. Legroom is excellent (the rear bench slides), though narrow windows, tinted glass and a mainly black interior mean it’s too dark for a family car. Practicality is restricted too; the boot isn’t that big. What’s more, the overall design is mismatched. You get heater controls from a Toyota Yaris, combined with a range of other seemingly unrelated switchgear, while the dash shape is dominated by odd-looking pods at either end, which contain a speaker and an air vent. There are also blue rings around the door speakers, a green radio display and orange illumination on the centre screen! As for the driving position, it’s high, but the wheel only adjusts for rake and the gearlever is located too low and far away. As with other Daihatsu models, there’s lots of vibration through the lever and the action feels rather fragile. Our average economy was poor, too – we saw 28.6mpg, compared to an official average of nearly 40mpg, while it churns out a lot of CO2 for a small car as well. 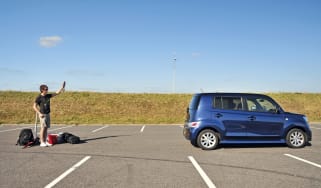 Final report: Its looks split opinion, but our snapper is sorry to see it go...
Visit/daihatsu/materia/19239/daihatsu-materia-21230-miles 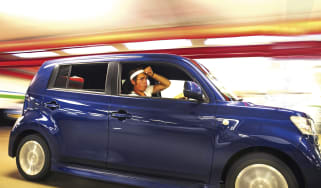 Fourth Report: Summer’s here, and our supermini has been mixing with the holiday traffic.
Visit/daihatsu/materia/19224/daihatsu-materia 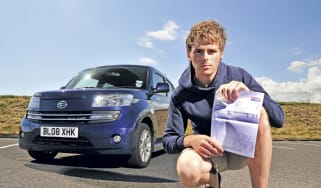 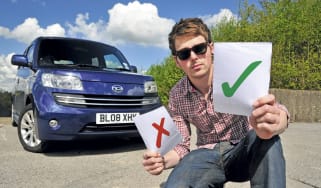 SECOND REPORT: Hit or miss? Our unusual-looking Japanese hatch is never short of attention – so we set out to find why that’s the case...
Visit/daihatsu/materia/19195/daihatsu-materia 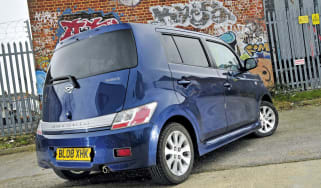 First report: Wherever we go, our new baby seems to turn heads – and we’re lapping up all the attention!
Skip to HeaderSkip to Content