Final report: Its looks split opinion, but our snapper is sorry to see it go... 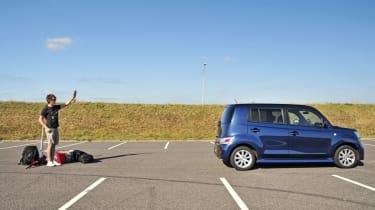 One thing has been preying on my mind for the past couple of months. My Daihatsu Materia is going back – and while I’m excited at the prospect of its replacement, I hate saying goodbye to old friends.

The little Daihatsu and I have shared lots of quality time together, and after nearly 26,000 miles, the boxy supermini still makes me smile.

Whether it’s a group of 15-year-old kids pointing and staring or someone in a petrol station asking lots of questions, the Materia never fails to attract attention. It’s one of those cars that provokes strong reactions from pedestrians and other road users. Over the last eight months, I’ve listened to plenty of feedback, but I would definitely give it the thumbs-up. And that makes waving goodbye even more distressing.

What will I miss the most? Well, aside from its sit-up-and-beg styling, I love how much fun it is to drive around town. With its short gearing, the Daihatsu feels faster than the instruments suggest, and it’s great for dealing with the chaos of big city roads.

The downside to its lively character is that this can be a bit draining – which is annoying first thing in the morning, before you’re wide awake.

Or when you’ve just landed back in the UK, late at night, after a long day of photography. But more often than not, I relished a trip in the Japanese oddbox.

In my role as Auto Express junior photographer, driving other cars makes me appreciate the Materia’s cabin space. It has plenty of room for kit and passengers, and has proven to be surprisingly practical for such a small package.

Not that living with the Materia has been completely trouble-free. At first, I found long motorway drives a bit tedious, as a lack of refinement is one of the few things to really let the Daihatsu down.

You do get used to the cabin noise, but the latest crop of superminis all highlight this car’s weakness.

To make matters worse, the Materia’s stereo has no auxiliary input, so I was forced to carry a selection of CDs to listen to instead of an iPod – my old Subaru Justy featured a handy aux-in socket as standard.

Other complaints include the interior’s hard plastics, and the cabin’s drab design doesn’t do justice to the distinctive exterior.

And that’s a shame, because I can’t help feeling the Materia is a bit of a hidden gem.

Yes, it’s a real Marmite car, but I can’t get enough of it.

So, how will I replace it? Well, my next motor has equally distinctive looks and a bit more... Soul. Any guesses?

There’s no denying the Daihatsu is a distinctive alternative to mainstream rivals. But looks are a small part of a supermini’s appeal – to really succeed it needs low running costs, and here the Materia struggles.

And when it comes to residuals, our high-mileage example is worth £6,610.