SECOND REPORT: Hit or miss? Our unusual-looking Japanese hatch is never short of attention – so we set out to find why that’s the case... 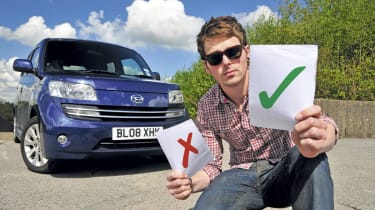 It's undeniably distinctive, but is our Materia a styling hit or a marketing miss? You certainly don’t see many on the road, so when I was handed the keys three months ago, I wondered if I could expect to turn heads in the unusual Daihatsu.

The answer is a resounding ‘yes’. Ever since the Japanese hatch turned up, it has been the centre of attention. But what has been causing this interest; do people love the styling or simply think it’s odd? To find out, I asked fellow inhabitants of Bournemouth, Dorset, to decide – and our panel (below) shows that it got the thumbs-up.

Having the right look is all very well, but you also need substance to go with your style. In this case, standard air-con, enough space to ferry your mates around and a good stereo tick most of the boxes, and the boot is big enough to take all of my camera gear, too.

The boxy hatchback isn’t perfect, though, and I have a few suggestions for making improvements. For a car that’s designed mainly for the city, a tighter turning circle would be welcome, while a tall sixth gear would be great when you do venture further afield.

I’ve been scratching my head to think up further complaints, but I simply can’t. I expected my old Subaru Justy to prove a hard act to follow, but the Daihatsu has slotted into its roll of mile-muncher, weekend runaround and camera car with ease. And, unlike my old Subaru, it’s something of a style icon, too.

NAME: Andrew Portsmouth (22)COMMENT: "As a DJ, image is everything – but I wouldn’t feel out of touch being seen in the Materia.'VERDICT: HIT

OPINION 2NAME: Mark Rix (37)COMMENT:  "It's the type of car that will grow on you. It reminds me of something out of Wacky Races."VERDICT: HIT

NAME: Max Tamanya (27)COMMENT: "It’s not really my cup of tea: I’m half Italian, so my taste in cars is for something a bit sleeker."VERDICT: MISS

While Otis likes the Materia’s looks and his panel gave it a split-decision thumbs-up, I’m not so sure. But I can’t argue with one thing: he’s certainly right when he says the car attracts attention!

I spent the weekend in it recently, and was frankly amazed at the number of bewildered stares I received. The last car I drove that prompted such a curious response was Renault’s ill-fated Avantime. That’s great for attention seekers, but not so hot if, like me, you prefer to keep a low profile. On the plus side, the Materia was easy to manoeuvre through the busy streets of the city, and has a spacious cabin.