First report: Wherever we go, our new baby seems to turn heads – and we’re lapping up all the attention! 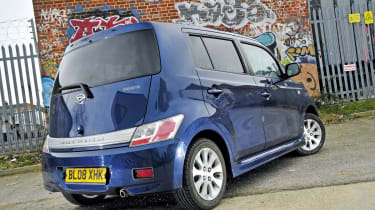 Downsizing is all the rage these days, but I’ve never been one for following trends. Having spent the past year racking up miles in our Subaru Justy, I’m making a step up in size this time round.

Auto Express has just taken delivery of a Daihatsu Materia, and as the big brother of the firm’s Sirion city car – which is essentially the same model as my Justy – I was the perfect candidate to take the keys. I actually like the oddball supermini-MPV shape, but my enthusiasm isn’t shared by all my colleagues. The boxy styling and flat panels could be straight from the Wacky Races cartoons, and I can just picture the Anthill Mob squeezing inside. As you can imagine, it has attracted more attention in a few days than the Justy managed in a year – so the Materia is not for anyone who wants to blend in. As junior staff photographer, I have an eye for design – but I also have practical needs, as I cover hundreds of miles a week with loads of camera gear.

To say I’ve been looking forward to the extra power of the Materia’s 102bhp 1.5-litre engine would be an understatement. It has 34bhp more than the Justy, which is welcome – especially at motorway speeds, where the Daihatsu feels more at home. Sadly, it doesn’t have the distinctive thrum of the three-cylinder Subaru, and it feels as if it needs a sixth gear at high speeds. Ordinarily, I would just turn up the stereo to mask the engine noise – but I’m put off by the radio’s irritating habit of hunting between frequencies. Plus, there’s no auxiliary input, so I can’t plug in my MP3 player as I could in the Justy.

The stereo does have one trick up its sleeve, though – illuminated front speakers. They’re ringed with blue lights that even have their own button on the dashboard. The glitzy feature serves no purpose whatsoever, but is perfectly in keeping with the car’s quirky exterior, and I really like it. The Materia certainly feels bigger than the Justy inside, yet it took surprisingly little time for me to fill its boot with my camera gear. A quick look at the specs reveals the problem – even though the body is 190mm longer than that of the Subaru, the Daihatsu doesn’t have much extra luggage space.

A sliding bench allows you to vary the size of the boot at the expense of rear legroom, but with the seats moved as far forward as possible, there isn’t enough legroom for adults to sit comfortably in the back. Worse still, the load space available ranges from 181 to 294 litres; the Justy managed an impressive 225 litres, so the extra storage I was expecting hasn’t really materialised! This is a car you buy for its style, though, and on that score I’m sold. In fact, I’m beginning to enjoy all the attention…

The first thing to strike me was how wide the Materia looks – due to the vertical side windows and boxy proportions. As a result, the cabin feels really spacious, so it’s a shame that everything is finished in grey or black. The shallow side windows make the interior feel dark , even with the blue-lit speaker surrounds, which are a real gimmick. Plus, the finish inside is poor. I was also a bit disappointed in the Materia’s fuel economy – I was expecting slightly better than 36.5mpg.