Obviously stylish, but practicality is compromised by the lack of a seven-seat option, and cabin quality is average 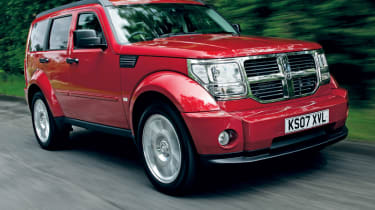 If you want to make a statement, the Dodge Nitro is an appealing SUV. But if you scratch beneath the surface, the cracks begin to show. Practicality is compromised by the lack of a seven-seat option, and cabin quality is average. However, if looks and pace are what matters, the model's styling and strong diesel engine hold obvious appeal.

You certainly can't accuse bosses at Dodge of plumping for the soft option when it comes to launching the US brand in this country.

The firm's first model in the UK, the Caliber, is aimed squarely at family car buyers. And now, it has come up with this: the Nitro compact SUV.

Although it's not a full-blooded off-roader, the newcomer will go head-to-head with the Hyundai Santa Fe and new Chevrolet Captiva. But does it have what it takes to survive in this competitive sector?

The Nitro gets off to a strong start, with its in-your-face styling. The big chrome grille, flared arches, upright windscreen and flat body sides all conjure up thoughts of large American trucks. They're sure to divide opinion, but whatever you think, the Nitro has an individual appearance that sets it apart from its rivals.

Open the door, and it's a similar story inside. The near-vertical windscreen results in an unusually shallow dashboard, and with the flat bonnet stretching out ahead, it feels as if you're sitting behind the wheel of an old-fashioned off-roader.

Thanks to a prominent centre console, none of the major controls is far from reach, but the plastics and switchgear are all quite average. What's more, there are plenty of sharp edges on the various plastic mouldings, and even the leather upholstery on our flagship SXT version feels slippery and thin.

Visibility is quite good, but the steering column doesn't adjust for reach, and the footwell is cramped, which results in a slightly offset driving position. Passengers in the rear are well catered for, although overall, you're left with the impression that interior space is tight; disappointing when you consider the car measures 4,584mm in length.

Luggage capacity could be better, too; the boot offers 389 litres. Split-folding rear seats boost the maximum figure to 1,994 litres, but the car's ride height makes loading awkward. Still, while the Nitro doesn't get the option of a third row of seats, SXT models come with Jeep's Load N' Go floor, which slides out up to 50cm to deal with big or heavy objects.

What's more, the 2.8-litre diesel engine ensures the Dodge can haul large loads. With 174bhp and 460Nm of torque, performance is predictably strong. While it's not the most refined oil-burner around, it does provide a decent amount of pace.

Mated to a five-speed automatic gearbox, the diesel unit propels the Nitro from 0-62mph in 10.5 seconds. At high cruising speeds, there's plenty of turbo whistle from the engine and road noise from the suspension, but it makes merging with fast-moving traffic and overtaking a breeze.

Predictably, these figures are not matched by the Nitro's handling, as the power-steering set-up is too light and vague around the straight-ahead. Constant corrections are required, and the Dodge fails to inspire much confidence. Throw it into a bend, and body roll is pronounced - something which is made worse by the lack of lateral support offered by the seats. Any surface imperfections are felt, too.

The manual version costs £1,000 less than the automatic driven here. Yet the entry-level SE manual model, which starts at £18,995, is the value option. It doesn't get the toys fitted to the SXT, but still has the Nitro's biggest selling point: its looks.