Presently not the best political climate for 4x4s, but a fairly decent car nonetheless 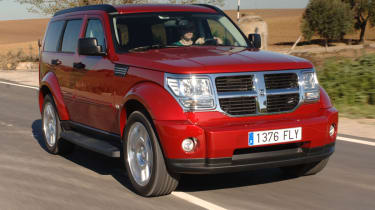 You've got to hand it to Dodge for being brave enough to launch the Nitro now. When most makers are trying to disguise gas-guzzlers in hatchback panelling, this car is wearing its American badge and off-road styling with pride. The firm says it will appeal to motorists who want to make their own choice. But our guess is that it's most likely to attract the attention of boy racers looking for something larger than life to turns heads on the road.

The Chancellor's ink is barely dry on his latest 4x4-bashing Budget, but Dodge has decided to unveil the mud-plugging Nitro. And its aggressive looks could scare off more than just the competition.

The US newcomer's super-sized appearance will certainly get green fingers wagging. It's bulky, with a massive grille, angular bodywork and flared wheelarches. What's more, it sits a huge 22cm off the ground on 20-inch alloys and has running boards for good measure.

A switch that allows you to swap between two and four-wheel drive promises off-road thrills, while the cheap plastic dashboard and wipe-clean fabric on the seats add to the car's utilitarian feel.

Nevertheless, Dodge is talking down the model's prowess in the rough stuff, with bosses describing the Nitro as a 'soft-road' cousin to the Jeep Compass. So the tall ride height and mean looks are for show more than anything else - but the Nitro isn't particularly at home on the road, either. The 2.8-litre CRD diesel we tried was more than capable of hauling the Nitro's 1,855kg weight, but vague steering, bouncy suspension and its tall frame meant it didn't feel terribly secure at speed - especially in side winds.

On the plus side, you get plenty of space and equipment for your money. The 369-litre boot expands to 1,994 litres with the rear bench folded flat, plus there is a handy sliding load floor. Other features include an auxiliary socket to plug in MP3 players, plus stability and traction control. Prices start from £18,990 for the entry-level model, due to go on sale in July.

So the Nitro is not without some appeal. But we think it's unlikely to strike much of a chord with family drivers, due to its cumbersome road manners. For Dodge, it really does look as though it's a case of the wrong car at the wrong time.