The Dodge looks interesting, but simply doesn’t feel like a modern SUV. 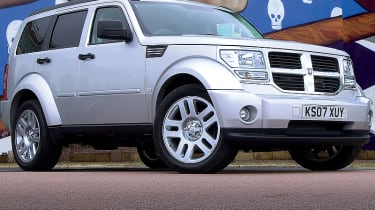 Driving The Dodge offers a thirsty 3.7-liter V6 petrol engine, or a suitably grunty 2.8-litre diesel; with 460Nm of torque, it isn’t short of pulling power. It’s smooth enough at idle, but is not terribly refined. The five-speed auto gives reasonably smooth changes, though, and the brakes have good feel and impressive performance. Sadly, the handling is a letdown, and the ride is uncomfortable. It seems to make no attempt at smoothing out bumps, crashing into them instead. At speed, the steering feels disconcertingly light either side of the dead-ahead position, yet at parking speeds the wheel becomes heavy. There’s also a fair degree of body roll to contend with in corners.

Marketplace If you’re going to name a car Nitro, you can hardly give it insipid styling. Dodge’s designers haven’t done that – it looks like a great big toy truck. It’s not subtle or sophisticated, but certainly has presence. The all-American off-roader is packed with character, and is a stand-out budget rival to the Land Rover Discovery. It competes alongside models including the Hyundai Santa Fe, Nissan Pathfinder and Kia Sorento. There are just the two engines, and two trim lines – SE and SXT. The diesel version will easily be the best seller, and it’s offered with a six-sped manual or a five-speed auto gearbox. Equipment levels are all-inclusive and prices are extremely competitive; the base diesel comes in at under £20,000.

Owning While it looks solid and expensive from the outside, the same can’t be said of the interior. The plastics are cheap and brittle, build quality is average and as with the exterior, square lines dominate. The dash is also exceptionally shallow for an SUV, giving the Nitro an old-fashioned feel. At least the controls are logically laid out, while you won’t miss the pistol-grip handbrake; it’s one of the largest we have ever encountered. You sit high up front, and the driving position could do with more adjustment. The rear initially feels OK, with good headroom and lots of legroom. However, the rear seats don’t offer enough underthigh support, and the transmission tunnel forces middle occupants to angle their feet uncomfortably out. The 389-litre boot is a reasonable size and there’s a slide-out floor. However, even the diesel isn’t very economical and retained values are unimpressive, though servicing costs are low. 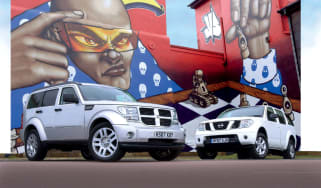 The latest addition to the Dodge line-up is the chunky Nitro SUV. It has bold looks and plenty of standard kit... so is the writing on the wall for it…
Dodge Nitro 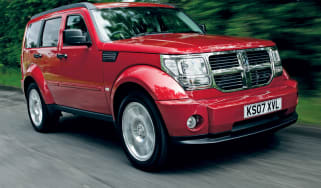 Obviously stylish, but practicality is compromised by the lack of a seven-seat option, and cabin quality is average
Dodge Nitro 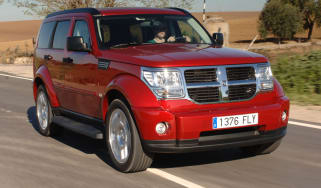 Presently not the best political climate for 4x4s, but a fairly decent car nonetheless
Skip to HeaderSkip to Content