Nissan Pathfinder is solid and durable, but while it’s capable off-road it struggles to match 4x4 rivals on it 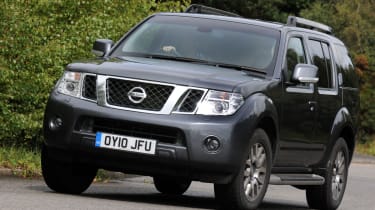 The Nissan Pathfinder is designed as a rugged, practical workhorse, and rivals the likes of the Land Rover Discovery 4, Toyota Land Cruiser and Mitsubishi Shogun. It’s based on the same underpinnings as the Nissan Navara pick-up, but instead of two or four seats and a load bed it features a huge seven-seater interior. The seating layout is flexible, with simple folding mechanisms and a flat floor allowing owners to quickly increase boot size if they need to. Up front, the Pathfinder doesn’t feel as luxurious as rivals like the Discovery, but it has plenty of kit as standard, which makes the price look reasonable value. Fire up the engine, though, and you soon realise this isn’t the most refined choice: the 2.5-litre dCi diesel is rather noisy. On the road, the suspension irons out rough surfaces, but the ride isn’t as smooth as in other, more premium 4x4s on the market. The car can’t disguise its enormous dimensions in corners, either, with plenty of body roll. But it comes into its own off-road, with the four-wheel-drive system and impressive 332Nm torque output helping the Pathfinder conquer challenging terrain.

The only engine option in the Pathfinder is a 2.5-litre four-cylinder diesel. This doesn’t sound like much considering the car’s large dimensions, but with 187bhp on tap – and more importantly 332Nm of torque – the 2.5 dCi does a reasonably good job of hauling the 4x4 along. Acenta models come with a six-speed manual gearbox, while the Tekna gets the option of this or a five-speed automatic – and the auto provides marginally stronger performance. It promises 0-62mph in 10.7 seconds, compared to manual models’ time of 11 seconds flat. The manual gearbox is also blighted by a vague and awkward shift action, so the auto may be a better option. Either way, though, refinement isn’t a strong point of the Pathfinder, with the diesel engine proving quite noisy. Plus, while the ride is perfect for soaking up huge holes in the road, it never settles down, so progress on tarmac can be fidgety, which can become tiresome on long journeys. You don’t expect great handling from a car of this size, but the imprecise steering and excessive body roll let the big Nissan down. The saving grace is how this car performs off the tarmac, where the low-down torque of the diesel engine and the four-wheel-drive transmission come into their own to make for virtually unstoppable progress. The trouble is, more modern rivals, such as the Land Rover Discovery, blend off-road prowess with much better performance on the tarmac.

There’s no escaping the size of the Pathfinder on the road, and its large dimensions and hefty weight come at a price, with some steep running costs. Manual models promise better fuel consumption, at 33.2mpg to the automatic version’s 31.4mpg, and while their 224g/km CO2 emissions will mean steep road tax bills, they’ll be lower than for the 238g/km auto Pathfinder. Acenta models sit in insurance group 31, with Tekna versions in group 32, so your premiums will be high whichever you go for, while service intervals on all Pathfinders stand at 18,000 miles.

The Nissan Pathfinder doesn't try too hard to be stylish, with a simple, boxy design. But because of its large dimensions, as well as its imposing nose and distinctive wheelarches, it has decent presence on the road. There’s a choice of Acenta and Tekna specs, and the former features 17-inch alloy wheels, as well as a chrome front grille, practical roof rails and privacy glass on the rear windows. Aluminium body protection also features on the door sills and tailgate. Tekna models stand out with 18-inch alloys and side steps, as well as xenon headlights. Inside, you sit very high up, and can never get away from the car’s sheer size. But all Pathfinders feel solidly constructed, and while there’s not a lot of design flair in evidence, the layout is as simple and easy to use as you expect from Nissan. Tekna spec brings a bit of extra interior style with its leather upholstery and wood-effect centre console trim, while its standard electric sunroof lets in welcome extra light.

As it’s based on the Navara pick-up, the Pathfinder impresses with its practicality. You obviously don’t get the large load bed of its sister model, but the dimensions are roughly the same – so there’s plenty of room for seven people when you need it, while the rear seats can be folded into the floor to provide van-like carrying capacity. With all the seats in position, boot size stands at 190 litres. Fold the rearmost seats, and you have 515 litres to play with. You can then fold the three seats in the middle row to get an enormous 2,091-litre capacity. And on Acenta models, the front passenger seatback folds forward, which is ideal if you have long items to carry. Adding to the practical appeal is the split tailgate – this is handy for sitting on while you take off muddy boots, for example. Alternatively, if you have something small to throw in the boot, you can just lift the rear screen without having to open the whole tailgate. And while the large dimensions take some getting used to from behind the wheel – driving down narrow streets or parking can be daunting at first – the high seating position means all occupants get a great view out. The huge three-tonne towing capacity will appeal to owners of large caravans or those who need to tow farm equipment.

In independent Euro NCAP crash tests, the Nissan Pathfinder was awarded just four out of five stars. This doesn’t sound great when most new cars achieve the maximum five-star score these days, although many large SUVs struggle to get a top score. Occupants are all very well looked after, as there are driver, passenger, side and curtain airbags on every model, while Nissan offers its ESP+ package as standard on the Pathfinder – this comprises ABS, an electronic stability program and traction control. As the Pathfinder is constructed to take a lot of punishment over rough terrain, reliability shouldn’t be an issue – especially as Nissan models are generally known for being durable. The Pathfinder didn’t feature in the Auto Express 2013 reliability and satisfaction survey, but Nissan finished an impressive 12th out of 32 in the manufacturer ranking – ahead of some leading premium brands – so buyers are unlikely to have any problems. 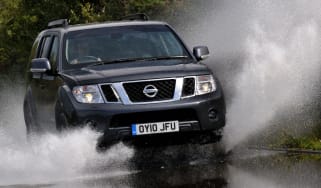 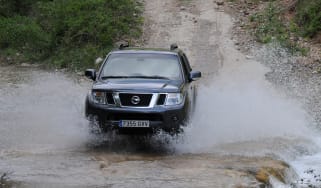 We are first to drive the facelifted version of Nissan's utilitarian SUV.
Nissan Pathfinder 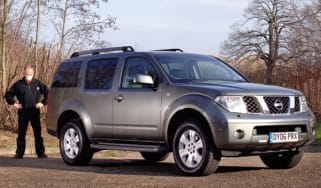 Nissan's big off-roader has been a trusty workhorse, but has its exhaust left a black cloud over its time with us?
Nissan Pathfinder 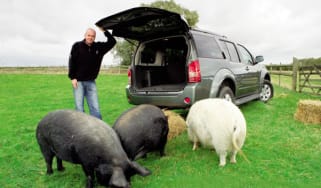 "Never work with children or animals" as the old saying goes. With the Pathfinder, you'll probably work with nothing else...
Nissan Pathfinder 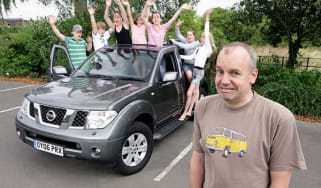 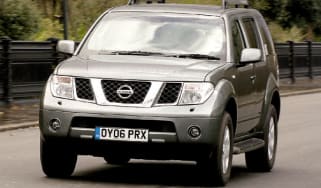 It's smaller than a five pence piece, but it's worth its weight in gold. Actually, I don't suppose it makes much of an impression on the scales, but y…
Nissan Pathfinder V6 T-Spec 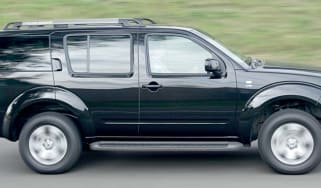 Seven seats and unstoppable off-road performance courtesy of a specially tuned Nissan 350Z engine... Whatever you are looking for in a new car, the 4.…
Nissan Pathfinder 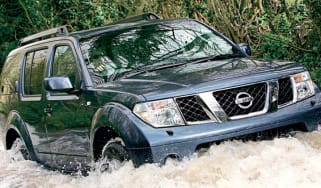 It might not have the hi-tech engine of the RX400h, but Nissan's latest off-roader has bags of traditional 4x4 appeal. Joining a growing range of Niss…
Skip to HeaderSkip to Content