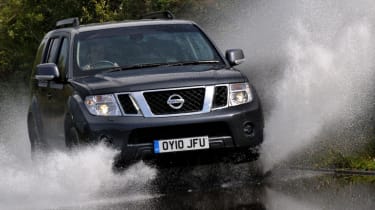 The Pathfinder is pretty good value for money considering the space and rugged ability on offer. But the real problem is the agricultural diesel engine – it’s torquey, but extremely unrefined on the move. The updates have improved fuel efficiency and comfort, yet Nissan could have spent more time isolating engine noise from the cabin. This still feels like an off-roader first, with any abilities on the tarmac intended as a bonus.

Is the Pathfinder going soft? Nissan has given its rugged off-roader a rounder look and more comfortable seats as part of a facelift. So we took the wheel to see if it’s lost its primitive charm.

As well as the cosmetic updates, the 2.5-litre dCi diesel has been retuned, with higher pressure fuel injection and new cylinder heads. It now delivers 21bhp more than before, at 187bhp, while peak torque  is up 47Nm to 450Nm.

Despite these increases, the car is 15 per cent more efficient, returning 33.2mpg, and puts out 40g/km less CO2, at 224g/km. While the diesel has more punch, it’s still very unrefined.

At motorway speeds the noise is acceptable, with only the sound of the wind and tyres to contend with. But from 30-60mph, even under light throttle loads, the unit is gruff and sends vibrations through the chassis.

It’s mated to a revised six-speed manual gearbox, yet this is imprecise, with a springy action. Handling is acceptable, with not too much body roll in corners, but the light steering makes the Pathfinder hard to place on the road.

Take it off tarmac, though, and it shines. Uneven surfaces can be tackled at speed, and the long suspension travel and deep-sidewall tyres isolate occupants from lumps and bumps.

The £31,595 price buys seven seats, masses of space and real go-anywhere ability – so while there are better luxury family haulers around, the big Nissan is a lot of car for the money.