"Never work with children or animals" as the old saying goes. With the Pathfinder, you'll probably work with nothing else... 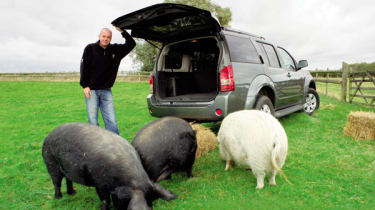 My last long-term report on our Nissan Pathfinder in August (Issue 923) saw me with a car full of teenagers. This time round, I've finished the job with a visit to a local farm - and to be honest with you, I had a pig of a day.

The reason for my choice of location? Well, when colleagues in the office have used the SUV for ferrying around bulky objects or large numbers of people, they have all come back with the same verdict: tough, roomy and useful - but a bit agricultural. And I think the same. Which is why I decided to put the big Nissan through its paces in a farm setting to see if it really is a barnstormer in the true sense of the word.

So with four-wheel drive engaged, the rear-most seats down and two bales of hay in the load area - they fitted - I set off across the fields in search of three little piggies. In truth, I knew exactly where they were - wolfing down fallen apples in the farm's orchard.

And as soon as I got out and shook a bucket of food they were over like a shot, immediately followed by the farmer's black Labrador, who arrived to see what all the fuss was about. I felt like an extra from The Archers!

The Pathfinder easily passed its farming test. The hay bales were bulky and heavy, and the rutted field we had to drive across to find the porkers was slippery after some heavy rain the night before. But the model's All Mode four-wheel-drive system is simple to use (all you do is twist the dial on the dashboard), and the off-roader hardly hesitated as it dug in and headed for the orchard. The 4x4 is a cousin of Nissan's rugged Navara pick-up. From the front doors forward, the two vehicles are exactly the same, so it doesn't come as a great surprise that the seven-seat SUV doubles up as a workhorse so easily.

And I've certainly been working it in terms of distance. The Pathfinder went for its first 18,000-mile service in October, only seven months after delivery. A menu-priced affair, the work cost £220 in total, and included all the usual spanner checks and fluid replacements that you'd expect.

However, I'm not sure everything is as it should be. The engine doesn't seem quite as eager and torquey as before, fuel economy has dipped from 31.7mpg to 28mpg exactly, and I've also noticed some exhaust smoke when pulling away. I'm now booking the Nissan back in for a check-up to see if the extra smoke is related to the slight dip in grunt. And I don't mean from the pigs...

Second opinion It's interesting to compare the Pathfinder with the Hyundai Santa Fe also on our fleet. The Nissan is undoubtedly bigger, has more boot space and road presence, but the Santa Fe is a better bet for most families. It's not only cheaper to buy, but seats seven in nearly as much comfort, is more refined, smoother riding and has a better diesel engine. In contrast, the Nissan seems, well, agricultural... Owen Mildenhall, road tester