We are first to drive the facelifted version of Nissan's utilitarian SUV. 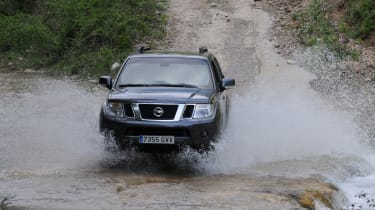 The Pathfinder is a cut-price Land Rover Discovery rival. But in truth its concept is closer to that of the Defender, which has a similar ladder chassis and utilitarian character. So while the Nissan does have a well equipped interior and plenty of kit, it’s better suited to commercial use, where its go-anywhere abilities and decent space will come into its own when the LCV version arrives later in the year. The engine is noisy, but the torque it produces is impressive, making the Pathfinder a reliable tow-car, a capable mud-plugger but a compromised on-road SUV.

Flying in the face of today’s road-biased SUVs, the Nissan Pathfinder sticks resolutely to a tried-and-tested recipe. It has an old school body-on-frame chassis for strength and simplicity, while power from its torquey diesel engine goes to all four wheels via a high or low range transfer gearbox. After five years on sale, Nissan has given its rugged off-roader its first makeover, and Auto Express is first behind the wheel.

Like the car’s proven underpinnings, function follows form inside and out. Changes to the exterior are minimal, so the simple two-box profile is carried over. Just like the Navara pick-up, which shares the bulk of the Pathfinder’s underpinnings, the newcomer gets a tweaked bumper, grille and bonnet. Our test car also featured the new Slate metallic paint finish.

On the inside, the Pathfinder’s seven-seat interior benefits from improved trim on the doors, redesigned seats for greater comfort and a revised dash which is clearer than that of the outgoing model.

The 2.5-litre dCi diesel engine is where Nissan’s engineers have spent most of their time. The unit has been retuned, given higher-pressure fuel injection and new cylinder heads. As a result, it now has 11 per cent more power, boasting 187bhp. More importantly, torque has also risen by 47Nm to a peak of 450Nm. Despite the extra performance, the engine is 15 per cent more fuel efficient, and carbon dioxide emissions have fallen by 40g/km to 224g/km. The engine in our car was connected to a revised six-speed manual gearbox.

On the road, it’s immediately obvious that the Pathfinder is a simple beast. The more expensive BMW X5 and Land Rover Discovery 4 are vastly more technologically advanced and offer a relatively car-like driving experience. But the Nissan’s slab-sided shape and high driving position mean that it’s very easy to pick your way through traffic. On the open road, the handling is acceptable, without too much bodyroll, while the ride is better than the Navara sister-car, thanks to the Pathfinder’s more sophisticated rear suspension.

Our car benefited from Nissan’s optional Connect Premium sat-nav system, which also includes a reversing camera, great for positioning the car for hooking up a trailer. Thanks to its rugged chassis, the Pathfinder can tow up to 3.5-tonnes.

But while the engine is more torquey, it’s very unrefined. At motorway speeds the noise is acceptable, with just the sound of the wind and tyres to contend with. But between 30 and 60mph, even under light throttle loads, the engine is gruff and very vocal, and sends vibrations through the chassis. The new gearbox is imprecise, with a very springy action, and the ratios are frustratingly widely spaced. This is to improve the CO2 emissions figure, but in real-life, it does leave you hunting for the right gear more often than you’d like.

Rival – Mitsubishi Shogun Despite its utilitarian past, the Shogun is no longer built on a ladder chassis in a bid to maintain its on-road appeal, but it can still match the best off-road. It’s the most economical car in its class, is spacious and has an air of dependability that only the Toyota Land Cruiser can match.