Seven seats and unstoppable off-road performance courtesy of a specially tuned Nissan 350Z engine... Whatever you are looking for in a new car, the 4.0-litre Pathfinder V6 offers something for everyone - but will that make it a hit with SUV buyers? 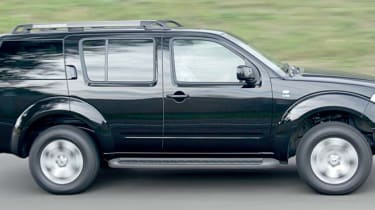 The Pathfinder is without doubt one of the best-value 4x4s available. However, while the new V6 model is smooth and swift, its running costs and price premium mean most buyers will be better off with the more frugal 2.5-litre diesel. Buy one of these before the month's end and you will get £2,000-worth of electrical kit free, too.

Seven seats and unstoppable off-road performance courtesy of a specially tuned Nissan 350Z engine... Whatever you are looking for in a new car, the 4.0-litre Pathfinder V6 offers something for everyone - but will that make it a hit with SUV buyers?

While demand for 'big' cars is growing, as proved by the popularity of, say, BMW's X5 and Volvo's XC90, customer support for off-road-biased 4x4s is dwindling. Yet it's hard not to see the Pathfinder's appeal. Its Tonka Toy looks and huge dimensions give it a truly enormous cabin. Fold down all the seats and you have a fully flat van-like capacity, and in five-passenger mode the boot is still on a par with that of a large estate.

All the car needs is a class-leading engine. As with Nissan's Murano, the new petrol model gets a modified version of the hot 350Z's V6. Enlarged to 4.0 litres, the motor develops 265bhp and 385Nm of torque.

Given the Pathfinder's girth, performance is impressive. Once the automatic gearbox has kicked down, brisk acceleration is accompanied by a throaty hum from under the bonnet, while 0-60mph takes only 8.9 seconds. In some circumstances the acceleration is too much for the Nissan to take, as the chassis is more suited to mud than tarmac.

That said, there is real merit to the Pathfinder's all-spring suspension. While it lacks the refinement or adjustability of air systems offered on the likes of the new Land Rover Discovery, the set-up does give reasonable insulation against road noise. On long motorway cruises the car feels comfortable, and its relaxing nature is further aided by huge ground clearance and excellent visibility.

There is, of course, a downside to having such a big petrol engine. Economy of 20.9mpg is likely to be the best you could hope for in the real world, and CO2 emissions of 327g/km will do little to help the bloated running costs.

At £33,960, the V6 T-Spec costs £3,300 more than the equivalent diesel. Both models have enough kit to put rivals to shame, with superb birdview DVD-based satellite-navigation, Blue-tooth connectivity and a rear parking camera as standard. Ultimately, though, if performance is your top priority, don't buy a 4x4. The Pathfinder makes far more sense as an oil-burner.