Nissan's big off-roader has been a trusty workhorse, but has its exhaust left a black cloud over its time with us? 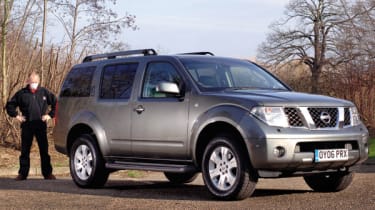 Something has been masking my affection for our Nissan Pathfinder. In the last report (Issue 936), associate editor Tom Johnston mentioned the excessive black exhaust smoke, increased fuel consumption and lack of grunt.

Sure enough, I could see smog in the rear view mirror, the fuel needle was heading south quickly and the car's get-up-and-go seemed to have got up and gone.

So off the Nissan went to Evans Halshaw in Bedford to have the problem rectified. Turns out it was the fuel injectors - a warranty job that left the 4x4 stranded in the workshop for nearly a week.

However, Nissan's head office had another take on the fault, telling me that it's unusual for a car with quite high mileage, like ours, to suffer from blocked injectors.

It's not as if the technology is new or unfamiliar - diesel is the main choice for most Pathfinder customers, and around 90 per cent of cars sold in this segment of the SUV market are oil-burners. Injectors today are reliable, cost-effective and relatively simple, so I put the manufacturer's point to the dealership.

"It can't be the injectors," I told the service manager as if I had come to that conclusion myself. "Well, we've had quite a few in," he countered. "So I'd disagree with you on that." And so the offending items were replaced. But were they faulty or not?

The replacements certainly made a difference to the amount of exhaust smoke, and the fuel consumption seemed to settle down again. Yet I still couldn't help sensing a slight lack of urgency in terms of acceleration. That didn't stop me taking the Pathfinder off-road for a full-on play in the mud, though. It was cold, wet, slippery and I only had normal road tyres, but credit where it's due, the big Nissan performed superbly in the mire.

The Pathfinder comes with an excellent electronically controlled All Mode 4x4 system. As well as 2WD and Auto settings - the latter of which does the thinking for you and apportions drive around all four wheels when it's a bit slippy - there are full-time 'Hi' and 'Lo' settings. The off-roader provides an impressive, confidence-inspiring 4x4 performance, the sort we've come to expect from the likes of Land Rover, but which Nissan can now legitimately lay claim to.

Yet it's the Pathfinder's day-to-day ability that's stood it in such good stead over the past year. It may not be that refined or smooth, but it's a big, honest, well equipped 4x4 that's coped with everything we've thrown at it - and you can't ask for much more than that.