The Nissan Pathfinder continues to impress our tester 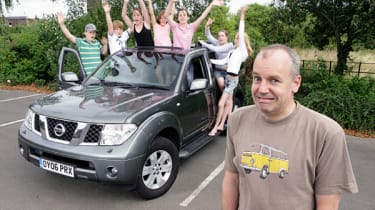 Kids - don't you just love them? Of course you do. But while the little treasures can bring so much pleasure, when it comes to going out in the car with all their friends, a new problem arises.

The arguments surrounding seven-seat MPVs and SUVs still rage, and Auto Express has often discussed the pros and cons. Views over their size, their mere existence, and people's freedom of choice will probably rumble on for ages.

Fair enough. Everyone is entitled to their own view. And here's mine, based on personal experience from driving our Nissan Pathfinder. I reckon seven-seaters, such as the rugged Nissan, can work out better for the environment if they're employed to their full capacity. In other words, don't just give them a wholesale brush-off unless you know what the owner is using the vehicle for.

Take my tribe. With a wife and three teenage daughters in tow, a regular saloon or estate is already full before you can say mirror, signal, manoeuvre. Add a grandparent or two, a work colleague or any one of an army of youthful friends from the Girl Guides, St John Ambulance, riding stables or table tennis club, and you're looking at a bigger car. Or, crucially, a second vehicle.

With five in one family, even when there's only one extra person we have to take two motors to go anywhere. That's why I think large multi-seat vehicles - such as the Pathfinder - are, in the right circumstances, a flyaway success.

Talking of flyaway, that's what an irritating piece of trim seems to have done... from the front edge of the car's roof bars. After only a few weeks of ownership, the nearside piece came off. A re-placement cost £40. "Have you had much call for this part?" I asked the man from Nissan. "Not too many for the Pathfinder, but we've had quite a few for the X-Trail," he said. "Be careful how you fit it. Don't force it; ease it into position."

I did as I was told, then checked to make sure the plastic had fixed firmly in place. But within two days it had gone again. A week later, so had the same section on the other side. I'm not going to bother getting any more.

Cosmetics aside, the Pathfinder continues to impress. The ease of driving and manoeuvrability are strong points; reasonable diesel economy is another. The voice-command sat-nav and keyless entry and ignition are luxurious touches in what is a slightly agricultural machine. First service is only 4,000 miles away - and, as you can see from our pictures, the Nissan deserves that.

Second opinion I agree entirely with Tom about the Pathfinder's versatility. I have two kids, but a five-day family camping expedition required all the packing skills of Santa's elves to slot in tents, sleeping bags, push chairs and other equipment. Yet few other vehicles are better suited to such demanding use. And when we got home, a quick brush inside was all it took to shift muddy footprints and half a Devon beach-worth of sand.Oliver Marriage, road test editor