It's smaller than a five pence piece, but it's worth its weight in gold. Actually, I don't suppose it makes much of an impression on the scales, but you get my meaning. I'm talking about the tiny reversing-aid camera fitted to the back of our Nissan Pathfinder 4x4. 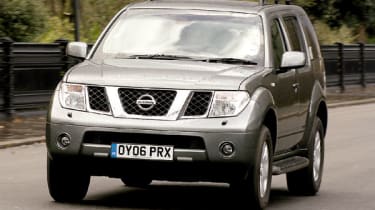 It's smaller than a five pence piece, but it's worth its weight in gold. Actually, I don't suppose it makes much of an impression on the scales, but you get my meaning. I'm talking about the tiny reversing-aid camera fitted to the back of our Nissan Pathfinder 4x4. It's not that I have a particular problem parking the vast Nissan. In fact, it's not bad in tight spots, thanks to light steering and big, clear mirrors. But it's those last few inches behind you that count, especially when you have to moor up in a claustrophobic underground car park every day, as we at Auto Express do. These are the times when you're glad of all the help you can get. A message near the dash-mounted screen warns you to check around the vehicle before merrily selecting reverse and charging backwards. And that's good advice: the lens is there to provide an insight into what's happening behind, not to give an overview of an entire multi-storey. I didn't have full confidence in the camera's accuracy at first, and got out a few times to check if I really was as close as it was showing me. I soon discovered there's a small margin for error. It's not the only feature I'm finding useful, either. The built-in satellite navigation, which uses the same screen as the reversing aid, is first-class. It gives clear directions, illustrated with a 3D-like, bird's-eye display. And if the system senses that there's a traffic problem up ahead, it informs you and offers alternative routes. I've used this option already when a recent accident shut two lanes of the M1 on a wet Friday night, and the resulting detour was a great success. While we're on the subject of wet nights, the All Mode 4x4 System is ideal for rain, mud or slush, and the driver can use it to shift between two and four-wheel drive on the move, at the turn of a switch. An Auto option works out where to apportion torque if the surface is slippery - there's a moderate off-road mode which divides torque between the front and rear axles, and a full-on, hardcore '4LO' setting for the real rough stuff. While I haven't had many chances to put the Pathfinder through its paces off-road, first impressions are good and, even though this is a big car, I'm finding it manageable and comfortable. Yet there are downsides, such as the heater controls which are too small to grasp properly. When I want to change the temperature, the selector goes up or down by only half a degree per click, or you can hold the thin temperature-control wheel in place while the display flicks up or down. Either way, the set-up is unsatisfactory. Also, there's a strange clunking noise when I turn the car right or left. I've checked the two gloveboxes and door pockets for loose items, but there's nothing there. So now I'm starting to think there's something behind the trim on the front passenger side. Maybe it's a screwdriver from the factory... My next stop will be to have the mystery rattle checked out by a dealer. Those niggles aside, everything's looking good - especially through that tiny reverse lens. Tom JohnstonSecond opinion There's an interesting contrast between this and our Land Rover Discovery. Both are big, spacious seven-seat SUVs that don't shy away from tackling the rough stuff, yet the Nissan carries a price advantage of over £10,000. It's far more economical, too. However, on the road the Nissan's less exclusive origins quickly show themselves. Although it's very well equipped, the Japanese 4x4 feels a bit crude and noisy. And I struggled to find a good driving position. Oliver Marriage, road test editor