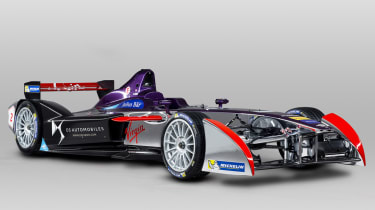 DS Automobiles has announced the creation of its own motorsport division, DS Performance. It will focus mainly on the Formula E car sponsored by DS, but could later influence performance-orientated road cars.

PSA Peugeot Citroen is looking to use the experience gained by DS Performance to further develop the electric & hybrid technology used in its road cars. Research and development of these technologies is crucial to both the Formula E Championship and future road car technology – though we don't yet know which models will benefit.

A spokesperson for the brand said it “wouldn’t be unreasonable” to expect the brand’s electric and hybrid expertise to influence future road-going models, though they could offer no confirmation on time frame.

The DS Virgin Formula E racing car’s entire powertrain has been developed by the engineers at DS Performance, along with the rear suspension and cooling system. The team finished fifth in last year’s inaugural running of the Formula E Championship with British driver Sam Bird placing fifth in the Driver standings.

Ex-Toro Rosso F1 and current Ferrari F1 test driver Jean-Eric Vergne will join Sam Bird at the team for the 2015-16 season. DS performance will also provide technical support to the team throughout the upcoming season.

DS Automobiles has called upon the expertise of Yves Matton and his team to advise DS Performance on the development of the DSV-01 racecar. Matton was the team principal of both Citroen’s World Rally Team and World Touring Car Championship teams, helping the teams to many of Citroen’s motorsport victories in recent years. As director of DS performance he will be looking to carry that success forward to the Formula E championship.