Emgrand EV previews tech that is likely to feature in future Volvos, and we take it for a drive 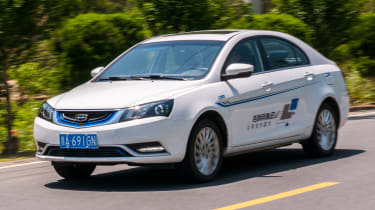 The Emgrand EV is an interesting pointer to tech that is likely to appear in Geelys and Volvos here in Europe. It needs fine-tuning, but there is clear potential here. Range anxiety is always going to be an issue with electric vehicles, but the system obviously works and with the old car underpinnings ditched in Europe for something more modern, the system could shape up to be a worthy Nissan Leaf competitor.

Geely, the Chinese owners of Volvo, are rumoured to be on the verge of launching a new brand aimed at Europe. The EC7 was set for UK launch in 2012 ­– and had even been awarded a four-star EuroNCAP rating – but sales never started. As Geely discovered in the Australian market, its second generation of cars simply weren’t appealing to western consumers.

Now with former Volvo designer Peter Horbury in charge of design, Geely is producing more exciting vehicles. Last year, the company announced its Blue Geely Initiative, stating its intention for 90 per cent of sales to come from new energy vehicles by 2020.

So it should come as no surprise that the new brand – codenamed L – will likely feature electric vehicles and hybrids in the line up. Geely has design studios in Gothenburg, Shanghai, Barcelona and Los Angeles, and Horbury is guiding the look of the first car in the Swedish centre. 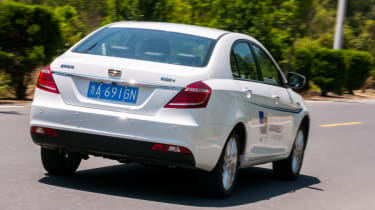 The Emgrand EV is the first electric car produced solely by the company. Based on the old EC7 – one of the best selling saloons in China – it’s been given an update both cosmetically and mechanically. Geely claims an all-electric range of 253km (around 155 miles) under real world conditions.

European models will ride on the Compact Modular Architecture (CMA) platform developed jointly between Volvo and Geely. Electric propulsion is likely to come from the system used in the Emgrand EV, and the upcoming Volvos may also use the same setup. Volvo’s new V40 and XC40 models, which also rides on the CMA platform, will be launched first – followed by an L-branded SUV.

“We’re going to gradually phase out the old platforms. Geely will gradually transition to CMA” said Li Shufu founder and chairman of Geely Holdings speaking at the 2016 Global Automotive Forum held in June in Chongqing.

One of the first things you notice when driving the car is the energy regeneration - take your foot off the accelerator and the car starts slowing rapidly. With no actual gears, the drive selector is rather redundant and could easily be replaced with buttons. Select the sport mode and the acceleration is a bit brisker but it makes little difference over the standard eco mode.

The bad news is the range is nowhere near as far as claimed. When we set off, the readout was shown as 241km (149 miles). Driving in mixed conditions and on a hot day using air conditioning we limped home looking desperately for a charging station having managed just shy of 200km (124 miles). The remaining range dropped off towards the end far faster than the actual distance covered. Charging time using a fast charger is just 48 minutes but using a standard household unit will take a staggering 14 hours. 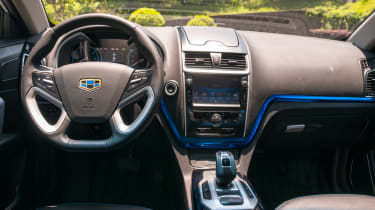 The steering has a natural feel to it and is well balanced. Potholes were soaked up well and while there weren’t enough sharp corners to push road holding, it was fine on a mixture of country roads and motorways. Acceleration is much better than the petrol driven versions of the car.

In China blue equals green and so the colour features prominently in the design. This goes some way to jazz up an otherwise unexciting exterior – with the front grille getting blue chrome strips along with LED running lights. Materials in general are good with liberal use of soft touch plastics and a Chinese decoration design feature on the cubby hole lid atop the dashboard. The only real quality let down was a flimsy feeling catch on the centre tunnel storage compartment.