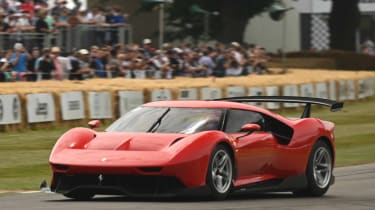 Ferrari’s in-house Styling Centre, in conjunction with the firm’s own engineering and aerodynamics team, has banded together with an affluent client to create the P80/C. It’s a one-off, bespoke track-only “Hero Car” inspired by the 1960s Ferrari 330 P3 and Dino 206 S.

The project entered its initial design phase in 2015. Using the Ferrari 488 GT3 (the track-only version of the 488 GTB) as a base, Maranello’s started by completely re-styling the bodywork. The standard 488’s headlights, nose-cone, engine cover, wings and aero package have all been ditched in favour of redesigned, hand-finished replacements.

Notable styling features include a ‘catamaran’ architecture, which means there’s almost no rear bodywork, leaving the car’s engine and transmission visible through the rear diffuser. The buyer also specified two sets of centre-lock alloy wheels and a louvred aluminium engine cover that pays tribute to the one fitted to the Ferrari 330 P3 Le Mans racer.

The interior is almost entirely stripped out, with little more than a pair of bright blue carbon fibre-backed Alcantara race seats and a digital instrument binnacle for comfort. Every visible interior trim panel is finished in carbon fibre, and the race-spec the steering wheel is lifted directly from the 488 GT3.

Performance figures are yet to be announced but as it’s based on the same platform as the 488 GT3, we’d expect it to use the same 3.9-litre twin-turbocharged V8. Also, as this one-off doesn’t need to conform to any race regulations, and doesn’t suffer from any FIA-imposed performance restrictors, it could produce more power than the 661bhp 488 GTB.

The cost of one-off Ferrari’s such as the P80/C remain confidential and are rarely published, but previous bespoke models have cost owners up to £9million.

What are your thoughts on the one-off Ferrari P80/C? Let us know in the comments section below…