A new Ferrari is always big news. But is the stunning California as good to drive as it looks? 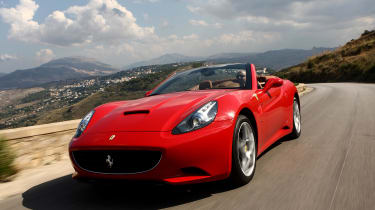 California was a name first used by Ferrari in the Sixties on a series of beautiful dropheads – and this all-new model is an unashamed attempt to rekindle that link. The new car might not be the cheapest Ferrari or, at nearly £150,000, even remotely ‘cheap’. But it is an outstanding driver’s car, which also allows you to travel swiftly and unobtrusively when you want to. Although it’s come at a bad time financially, the California seems good enough to weather the storm. This is an old-fashioned grand tourer that should appeal to wealthy Brits as much as it does Americans.

It’s been called the ‘baby’ Ferrari and even the new Dino. But the 193mph 2+2 convertible California is not even the cheapest model in the range – that title belongs to the £138,265 mid-engined F430. Nor is it an updated clone of the V6-engined Sixties two-seater Dino, which took Ferrari to a whole new market and drove it into the arms of saviour Fiat.

No, the new California is an old-fashioned, front-engined grand tourer in the best traditions of the Prancing Horse. With a 454bhp 4.3-litre V8 under the bonnet and a brand new seven-speed, dual-clutch transmission, it’s a relaxed take on the frantic Ferrari theme. And as the order book is full for the first two years of production at least, Ferrari is confident it can weather the current financial storm better than rivals such as Bentley and Aston Martin.

On the badly made Sicilian roads of our test route, the sleek new car instantly betrays its boulevard cruising roots. With the chassis and gearbox set in Comfort mode, the ride is supple and comfortable. The engine note is muted and the gearbox allows you to drive gently without the clamour of the F430. Ferrari reckons California buyers will be travelling further and with more passengers than those who choose the F430. It’s easy to drive, which should appeal to the female customers the firm is wooing.

The cabin is trimmed with the usual creamy leather hides, stitched immaculately. Headroom is plentiful, but those over six feet tall will find legroom tight.

At a touch of a button, the aluminium roof does its 14-second motorised pirouette, with both parts of the metal lid sliding on top of the boot space. With the roof down there’s 240 litres of space (360 litres when it’s up), and that’s easily enough for a couple of weekend bags. The no-cost option rear seats take more luggage, although they are barely big enough for the smallest infants, despite their Isofix fittings.

The all-new chassis features a flat undertray with venturi tunnels front and rear for greater downforce. Double wishbones make up the front suspension, while a new multilink system features at the back, and you notice the extra compliance over big bumps. The speed-related, power-assisted steering makes in-town manoeuvring and parking a breeze.

Not that the California is all show and no go. Turn the steering wheel Manettino switch to Sport and gearchanges are sharpened, the exhaust valves open more readily and the suspension raises its game. Suddenly, the car is ready for action, with outrageous pace and a soundtrack of yelps, barks and growls to rival the best TVR ever offered.

A lot of vibration transmits from the new direct fuel injection engine to the cabin, but low-speed torque is incredible, and without the traction control the tyres would cremate themselves.

Perhaps most impressive is the new transmission, which allows access to that performance without a micro-second’s delay. It makes the old robotised manual look very last century, and Ferrari says it will fit dual-clutch gearboxes to all its cars eventually.

The standard ceramic brakes are amazing, even if pedal feel isn’t quite as linear as an all-steel set-up. The steering is sharp and slightly over-assisted, and on A-roads you need to focus to maintain smooth progress. At high speeds, though, the California is rock-solid, inspires confidence and, with the rear air diffuser, the cabin remains amazingly draught-free.