The updated California is 30kg lighter, has 30bhp more power and benefits from a handling pack 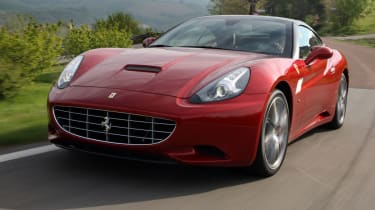 The California is the most laid-back model in the Ferrari range. These updates don’t change that, but they add even more ability. The extra 30bhp boosts the car’s low-down flexibility and helps it to charge even harder at high revs, while the new Handling Speciale pack sharpens the steering and tightens body control without spoiling cruising ability. Ferrari is at the height of its powers right now, and this new California proves that it can cater for more than one type of customer.

Advertisement - Article continues below
Things move fast at Ferrari. The California was launched three years ago, but already a revised version has been unleashed. It offers more power, less weight and an optional Handling Speciale pack.
When it went on sale, the California ushered in a number of firsts for Ferrari, including its first direct-injection V8 engine, first twin-clutch gearbox and first folding hardtop. It also took the company in a different direction and was intended to attract a new type of customer.
The approach has worked so far: 70 per cent of the 8,000 Californias sold to date have gone to buyers new to the Ferrari brand. But enthusiasts haven’t warmed to its laid-back character – so can some extra horsepower and a more aggressive chassis set-up broaden its fan base?
A new exhaust, reshaped pistons and an ECU tweak have liberated an extra 30bhp from the 4.3-litre V8, taking the total to 483bhp and lowering the car’s 0-62mph time by a tenth, to 3.8 seconds. It’s still the ‘slowest’ Ferrari on sale, but while it can’t conjure up the 458’s shocking pace, it’s very fast nonetheless, and the extra power adds urgency throughout the rev range.
Advertisement - Article continues below
Advertisement
Advertisement - Article continues below

Drop the roof and there’s a howl from the vertically stacked exhausts as you close in on the redline, followed by a shotgun-like explosion when you change up. It sounds incredible.
Some 30kg has been cut from the California’s kerbweight by modifying the alloys used in sections of the aluminium chassis, as well as the way they are bonded together. There are no efficiency gains as a result of the weight reduction, though. Our test car was fitted with stop-start, which keeps CO2 emissions down to an impressive 270g/km as before.
For standard models, that’s where the changes end, but you can now order a £4,320 Handling Speciale pack. It adds a nine per cent quicker steering rack, plus uprated suspension with 15 per cent stiffer springs at the front and 11 per cent stiffer ones at the rear. Revised damper settings complete the updates.
You notice the steering first: even at low speeds it reacts far quicker than the standard car’s. And if you jump straight from a regular California to one fitted with the handling pack, you’ll revel in the extra precision on a tight, snaking back road.
Advertisement - Article continues below
The new suspension keeps the body in much tighter check, too, although a certain degree of body roll, as well as pitch and dive under braking, is inevitable in a car that still weighs a hefty 1,735kg. What the handling pack does is stretch the breadth of the California’s abilities. Flick the Manettino switch on the steering wheel to Comfort mode and this car can still waft along serenely, doing a passable impression of a Mercedes SL.
Yet if you turn the dial to Sport and take control of the gear changes with the steering wheel shift paddles, the California becomes a very entertaining sports car indeed.
If you’re after the full open-top Ferrari experience, the 458 Spider is a sharper drive. But the California is a more versatile car that can be used every day. Plus, more power and better handling mean it offers more to genuine driving enthusiasts than the old model.
Advertisement
Share this on TwitterShare this on FacebookEmail
Advertisement