Now you can rip up the road guilt-free, as Italian V8 stunner gets stop-start. 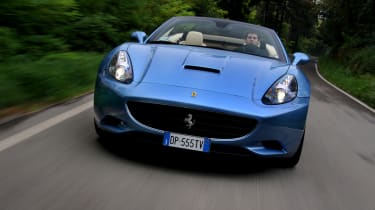 You might wonder if there is much point fitting stop-start to a V8 supercar. But the fact that the HELE system brings eco benefits without affecting the California’s driving experience is cause to celebrate. And tweaks like stop-start are the tip of the iceberg. In the next three years, Formula One-style KERS systems and mild hybrid set-ups are expected on roadgoing Ferraris. Not only will they be greener, they should also be even more exciting to drive.

THESE days, even supercar makers have to be seen to be green – and Ferrari is no different. While this California looks like any other example of the firm’s 460bhp 4.3-litre V8 coupé-cabrio, a raft of technology makes it the most eco-friendly Ferrari you can buy.

This is the first of a new range of models with stop-start, which automatically shuts down the V8 when the car is stationary, saving fuel and cutting emissions. But does it sit easily in a £140,000 supercar? Auto Express visited Ferrari’s Maranello HQ to find out.

The tech is being introduced as part of the High Emotion Low Emissions (HELE) package, and is designed to reduce the California’s environmental impact without detracting from its driving fun.

In addition to stop-start, the car gets a new intelligent engine fan, which keeps a more constant control over temperature. This uses a brushless electric motor, is 2.1kg lighter than in the regular car and reduces the load on the alternator. It’s so effective at improving air flow that the California’s drag coefficient has been trimmed by five per cent.

An intelligent fuel pump cuts the demands on the alternator further, while the air-con is more efficient. And Ferrari says the engine has an extra 25Nm of torque as a result. Other tweaks include an adaptive shift system, which sees the gearbox change up earlier in automatic mode.

Stop-start is by far the biggest contributor to the reduction in emissions – CO2 output tumbles from 299g/km in the standard car to 270g/km. Fuel economy is also likely to improve by 10 per cent, to 23.8mpg combined, but this hasn’t been confirmed.

What’s the newcomer like on the move then? Well, come to a halt at a traffic light, for example, and the V8 switches off. It’s a weird feeling in a Ferrari – as the engine is always such a huge part of the experience, even at idle. However, you soon get used to the silence, as well as the slight, 230-millisecond delay as you move from brake to throttle again (or pull the ‘up’ paddle), before the engine quietly restarts.

It’s a clever set-up, too, analysing the angle of the steering wheel so that if you are approaching a roundabout or a junction, the engine won’t shut down just when you need to pull away sharply. A button above the interior mirror lets you turn off the stop-start altogether.

On the open road, the driving experience is unaffected. That means epic pace and a deep roar from the V8, plus punchy shifts from the seven-speed twin-clutch box. And the handling changes from compliant GT to stiff sports car with a click of the manettino switch on the steering wheel.

From next month, stop-start will be an £820 option, predicted to be specified by 10-15 per cent of buyers. “Drivers like it as they can be seen to be green, even in a performance car,” a spokeswoman said. Next year, the California is likely to get the HELE system as standard, and Ferrari is expected to roll it out across its range soon.

RIVAL: Bentley Continental GT There’s no stop-start yet, but Supersports versions of the current Continental – including the GTC – can run on biofuel. Every model in the all-new range will be able to as well, while a fresh 4.0-litre V8, emitting 40 per cent less CO2, is on the horizon.