The Ferrari Portofino, a new entry-level convertible GT car to replace the California T, has been seen in the metal for the first time at the 2017 Frankfurt Motor Show. It ups the ante on the outgoing California T with more power, a new, lighter chassis, and aggressive looking, more aerodynamic bodywork.

Under the bonnet sits the same 3.9-litre turbocharged V8 engine found in its predecessor, though Ferrari has tweaked it with new components and recalibration of the engine management software. New pistons, con-rods and a redesigned intake system mean that the engine now produces 592bhp – a healthy increase of 40bhp. 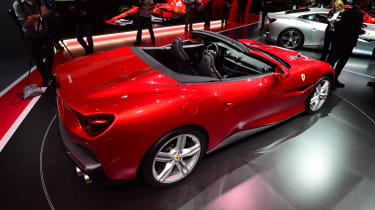 The additional power means a tenth of a second has been shaved from the car’s 0-62mph time – it’ll now do the dash in 3.5 seconds, while top speed is claimed to be in excess of 199mph. Ferrari claims that tweaked variable boost management means higher levels of acceleration across the revband, plus lower fuel consumption compared to the California T.

Under the skin, the car benefits from a redesigned chassis that Ferrari says is lighter and more rigid. Ferrari has not said how much lighter the Portofino is compared to the California T, but given the minor improvement in the 0-62mph time, it should only be a modest reduction.

Elsewhere, the Portofino gets Ferrari’s latest generation electronic rear differential, dubbed E-Diff3. It’s also the first GT car in Ferrari’s range to be fitted with electronic power steering, while the suspension has been updated in a bid to reduce body roll and improve damping. 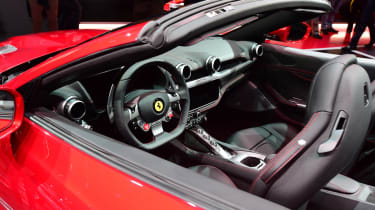 In terms of design, the Portofino introduces Ferrari’s latest design ethos to the starting point of the firm’s range. The front end of the car is more aggressive with 488 GTB inspired LED headlights, while angled cuts and lines sculpt the car’s sides and a new rear diffuser and taillight setup is spotted at the back.

What do you make of Ferrari's new Portofino? Let us know in the comments!