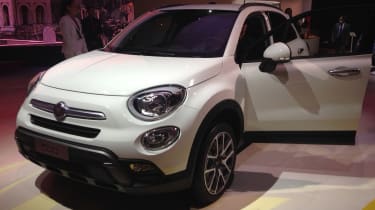 Fiat has officially revealed its new crossover – the Fiat 500X – at the Paris Motor Show. The five-door soft-roader shares its platform and drivetrain options with the Jeep Renegade.

The 500X aims to swell the 500 city car’s cute detailing on to a five-door bodyshell more successfully than the bloated 500L MPV. While it’ll sell on the strength of its opinion-dividing looks for many, there’s also a strong range of engines and gearboxes to choose from, plus a wide selection of personalisation options. Twelve colour choices and eight alloy wheel designs, ranging from 16-inch to 18-inch rims, help as well.

Under the 500X’s bonnet, you can specify one of four petrol engines or three diesels. Front-drive petrol models get either 109bhp and a five-speed manual gearbox or 138bhp and a choice between six-speed manual or dual-clutch transmissions. A 168bhp engine powers the all-wheel-drive 500X, which features a nine-speed automatic gearbox as standard. 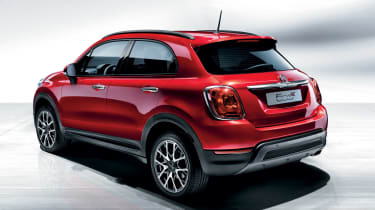 The most powerful diesel 500X also gets all-wheel drive and a nine-speed box – it’s a 2.0-litre unit with 138bhp. Lower down the range, there’s a 118bhp 1.6 with a six-speed manual, while the entry-level diesel is a 94bhp 1.3-litre with a five-speed manual box.

All versions get a ‘Drive Mood Selector’, which remaps the response of the engine, gearbox, steering and brakes depending on driving conditions. ‘Auto’ adapts as you drive, ‘Sport’ claims to sharpen the car’s reactions and ‘All Weather’ promises foolproof behaviour in slippery conditions.

Fiat hasn’t yet revealed interior pictures of the 500X, but it’s expected to share much with the 500L. There’s the same choice of five-inch or 6.5-inch infotainment touchscreens, with standard Bluetooth and USB connections, plus optional Beats audio and DAB radio.

Also on the options list is a suite of safety systems, including blind-spot monitoring and a rear view parking camera. The 500X does lose out to the 500L on boot capacity, though – the newcomer offers 350 litres to the 500L’s 400-litre load bay.

Welcome to our Paris Motor Show hub page. Scroll down for all our Paris content...
Fiat 500X review 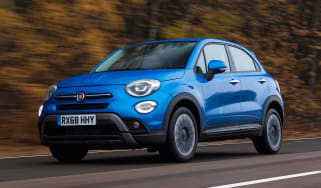