Ford to bring legendary muscle car to UK showrooms for first time, dealers already being briefed ahead of its arrival 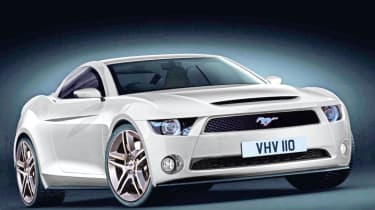 A big slice of America is crossing the Atlantic: the Mustang is heading to UK showrooms, Auto Express can reveal. To coincide with the muscle car’s 50th anniversary in 2014, Ford will launch it across the world, and in right-hand drive for the first time.

Sources have revealed that dealers are being told to prepare for its arrival. The newcomer will sit at the top of the range alongside regular models such as the Fiesta and Focus in dealerships. It will be the most European-friendly version of the coupé ever – but will still be a proper Mustang, with V8s for the fastest models.

The company’s ‘One Ford’ strategy is behind the Mustang’s migration. To cut costs and reduce the number of models (and platforms) the firm makes globally, the all-new model will be a ‘world car’, sold in different markets virtually unchanged.

The Fiesta, Focus and Mondeo already follow this approach, and it means there is a business case for producing right-hand-drive Mustangs in the States and shipping them to Europe. But the UK won’t be the only right-hand-drive market the car is offered in; Australia and Japan will take the car, too.

An insider revealed: “The design studios in Europe and Australia are working on it, as well as those in America. It will be smaller and closer in spirit to the original 1964 Mustang.”

Our illustrations give you a good idea of how the new ‘pony’ car will look. It’s leaner and ever so slightly smaller, but still very mean, and packs all the visual aggression for which the legendary model has been famous. This includes recessed headlamps, a traditional C-pillar and triple lens tail-lights.

Yet while it harks back to Sixties Mustangs, the new car will be the most technically advanced version ever. It will be far lighter than the current model, for improved fuel efficiency and reduced CO2 emissions.

Plus, for the first time, it’s set to feature independent rear suspension. As on the Chevrolet Camaro, this set-up replaces the decades-old live rear axle of the current car, and should mean better ride comfort and traction.

Power will come from a new 2.5-litre four-cylinder EcoBoost turbo with around 300bhp, while a range-topping 500bhp 5.4-litre V8 will be available, too. Six-speed manual and auto transmissions are likely to be offered with torque vectoring to keep the performance in check, while the handling is expected to be tuned by Jost Capito and his team at Ford’s Global Performance Vehicles arm.

As well as upping quality under the skin, Ford will have to pay attention to the materials used inside – current models fall behind their European rivals in terms of fit and finish. The move to make the Mustang a world car will be controversial.

Bosses will need to tread carefully so as not to alienate the model’s huge fan base – nearly 75,000 examples were sold in the US in 2010 – and still appeal to discerning UK buyers used to the BMW 3-Series Coupé and Audi A5.

But with Vauxhall’s VXR8, and the Monaro before it, proving that there’s room for powerful muscle cars in the line-up of a mainstream maker, Ford will be confident of success.