Forty years on, the original Ford Fiesta supermini is still lots of fun 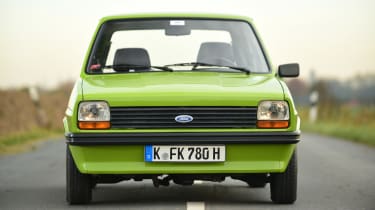 Ford wasn’t the first motor manufacturer to cotton on to the fact that small, front-wheel-drive family cars would be big business, but when the Fiesta broke cover in 1976, it sent a message to the industry that superminis were here to stay.

The Mk1 Fiesta was launched with a choice of six trim levels, including a van. Our early test model features Ford’s 52bhp 1.1-litre four-cylinder, which makes light work of the car’s 715kg kerbweight. Once the engine is warm and the choke fully home – something you don’t have to consider with the current fuel-injected Fiesta – you’d be surprised by the car’s performance.

Officially, 0-60mph took 15.2 seconds, but the short gearing of Ford’s precise four-speed manual box means the car can still hold its own in modern traffic. It feels delicate to drive, too, with a lovely weight to the unassisted steering – although the set-up isn’t that precise. And with only four ratios, the engine is screaming at 70mph on the motorway. However, together with the interior, it’s all part of the retro charm.

Our Fiesta’s lime green paint and brown and cream cabin screams seventies, with an old-school radio and a cigarette lighter also highlighting the car’s age. Yet even in 1976, the Ford offered an involving driving experience with strong performance, plus sophisticated chassis technology that bucked the trend at the time by featuring coil-spring suspension all-round, where rivals opted for cheaper designs. Coupled with decent practicality and a stylish design, the Fiesta was a hit and set the template for the next 40 years.