A new Fiesta ST is on the way but that hasn't stopped the current model gaining an extra pair of doors to help with the run-out... 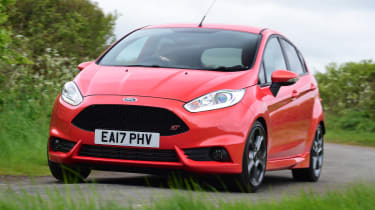 There’s no doubt that the addition of two extra doors makes the Ford Fiesta ST an even easier car to live with, but for many, the £585 premium will be better spent on the coveted Mountune MP215 upgrade instead. The ST remains a fine hot hatch thanks to its eager engine and excellent handling – and there’s no doubt its forthcoming replacement will have a tough challenge to top it.

The Ford Fiesta ST has been one of our favourite hot hatches ever since it first arrived in 2013. But an all-new model has now been revealed, boasting 197bhp from a three-cylinder turbocharged engine. It’ll go on sale in 2018.

Despite this, a five-door version of the current feisty Fiesta has just been added to the range, designed to aid accessibility. Styling may be subjective, but we’ve driven it to see if the added practicality is worth the extra outlay. 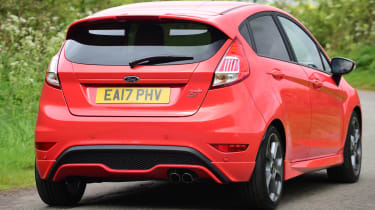 The entry-level ST has been discontinued, too, with the range now comprising just ST-2 and ST-3, as well as the limited run (three-door only) ST 200. However, while ST-2s previously benefitted from the ST Style Pack – including red brake callipers, illuminated ST themed scuff plates and grey wheels – as standard, you’ll now find it relegated to the options list.

The two extra doors make getting in and out much easier for passengers – who no longer have to clamber past the huge Recaro bucket seats to reach the rear. The slight redesign needed to incorporate the rear doors means that the rear windows are a bit bigger too, so it feels lighter inside and less claustrophobic in the back. Legroom is still at a premium, however.

From behind the wheel, the Fiesta ST still sets the benchmark in this class. Ford freshened the car up last year for the arrival of the ST 200 – tweaking the steering and damper settings for a more responsive, yet more comfortable drive. The well-weighted steering is full of feedback, and there’s very little body roll.

The 1.6-litre, four-cylinder turbo is as eager as ever, feeling even faster than its 180bhp output would suggest. The overboost features helps, dialling power to 197bhp for up to 15 seconds at a time. The 0-62mph sprint takes 6.9 seconds – the same as the three-door car. 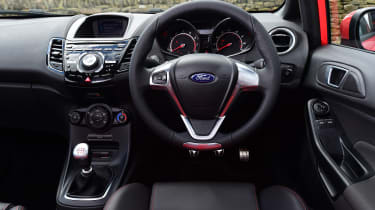 The five-door car is a little less efficient than the three-door model, however, dropping from 47.9mpg to 46.3mpg thanks to its 20kg heavier kerbweight. In the real world, though, you’ll struggle to break 40mpg in either. We’re expecting big improvements when the three-cylinder car arrives next year.

Inside, Ford has kept things simple by carrying over the ST branded steering wheel and sporty gear lever from the three-door. These differences aside, the ST’s cabin is barely different to that of lesser Fiestas, with the same confusing fascia and tiny infotainment screen. The centre console has always been the Fiesta ST’s low-point, in fact; it’s an awkward, plasticy stack festooned with small buttons. Only range-topping ST-3 cars get built in sat nav as standard.