The Focus Zetec S has impressed in petrol form. Is the diesel version just as good? 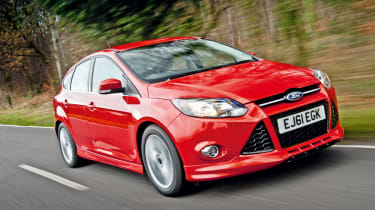 The Zetec S gives impatient Focus fans a sporty choice until the ST arrives next year. Strong economy means this 2.0 TDCi version is more rounded than the 177bhp petrol car, but the latter is still more engaging. Suspension changes also give finer control without sacrificing comfort. With its extra kit, the Zetec S is an attractive choice.

Carter and Regan might be tearing around in Ford’s hottest Focus ST in a big-screen remake of The Sweeney, but those of us without Hollywood backing will have to make do with the Zetec S. The new model is the same price as Titanium-spec cars, yet brings more sportiness than luxury.
Those with an eye on ultimate performance should opt for the 177bhp 1.6 EcoBoost petrol car. However, this 161bhp 2.0-litre TDCi, the most powerful diesel on offer, is no poor substitute. From 0-62mph it’s only seven tenths slower, posting a time of 8.6 seconds, and it trumps the petrol car for economy, with a figure of 56.5mpg – up 9.4mpg.
Video: watch CarBuyer's video review of the Ford Focus
[[{"type":"media","view_mode":"content_narrow","fid":"68652","attributes":{"alt":"","class":"media-image"}}]]

The diesel Zetec S feels quick rather than outrageously rapid on the road, with the engine’s low-rev torque giving effortless progress. But unlike a lot of turbodiesels, there’s incentive to rev it, as the TDCi offers a wide powerband and remains refined even at high revs. Plus, the gearshift is quick and precise.
The really big changes for the Zetec S are in its ride and handling. It’s fitted with what Ford describes as Sports Pack suspension, so the springs and damper rates have been stiffened by 25 per cent to sharpen up the car on the road. Larger 17-inch alloys also feature.
The result is a more alert steering feel and better resistance to body roll. Even better, this increased precision has been achieved without compromises in ride comfort – which Ford claims is due to having left the ride height as standard.
The Zetec S still appears to sit lower on the road, though, thanks to a beefy bodykit. Body-coloured skirts, lower bumpers front and rear, standard-fit foglamps and a roof-mounted spoiler set the new car apart from the regular Focus.
Inside, changes include a raised centre console between the driver and passenger seats, alloy covers on the pedals and Ford’s ‘Power’ engine start button.
The seats themselves are more heavily contoured to hold you tightly, while the leather on the steering wheel adds to the sporting feel. Otherwise, it’s all just standard Focus, which means the dashboard is well constructed, if rather busy, and backlit in blue.
The space on offer is as good as ever, although if you want the additional carrying capacity of an estate you’ll need to wait until February for a Zetec S wagon.
Share this on TwitterShare this on FacebookEmail