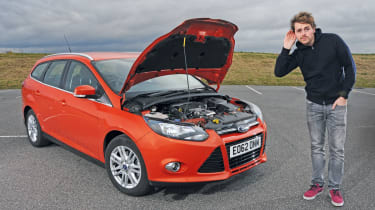 Is my latest car singing a familiar tune? When I first started at Auto Express, I was given the task of running a Subaru Justy. And although I was initially sceptical, I grew to love the quirky city runaround with its three-cylinder 1.0-litre petrol engine. Even now, I look back at it with fondness.

The Justy was small and easy to drive, and while refinement was in short supply, I really liked the tuneful three-cylinder thrum that was all too evident from under the bonnet. For me, this was part of the city car’s charm – not something you’d be prepared to put up with in a £20,000 family model, but more than acceptable in a bargain runabout.

Fast forward a few years, and I’m happy to report that my love of three-cylinder engines has been rekindled, after I took charge of our Ford Focus Estate, with its 1.0-litre EcoBoost turbo.

The Ford has serenaded me in a very different way, though. While the engine note played a big part in my enjoyment of the Subaru, my love of the Focus stems from the lack of its obvious three-cylinder character. This car proves how much engine technology has improved in recent years, because unless you have a very keen ear, you’d probably think it was powered by a four-cylinder.

The 1.0-litre EcoBoost has won awards for its innovation, and our car features the more powerful 123bhp version, so there’s more than enough grunt to lug around all my camera gear. But what really impresses is the fact that there’s hardly any significant engine noise most of the time.

Only when you rev the Focus hard do you notice that distinctive offbeat three-cylinder thrum, and even then, it remains smooth and doesn’t get strained. So there’s only a passing flashback to my buzzy little Subaru.

Most passengers I’ve carried thought the car had a conventional large-capacity four-cylinder petrol engine, so it’s been up to me to bore them with the “it’s only got three cylinders, don’t you know?” story. Just as impressive as the engine’s refinement is the Ford’s spacious boot. It offers a capacity of 476 litres with the seats in place, there’s barely any wheelarch intrusion and the lip is nice and low, for easy loading.

Plus, when the standard boot space isn’t enough, it’s easy to fold the rear seats and make use of the full load capacity. The car can swallow up to 1,502 litres of kit, but it’s the load length that really comes in handy when I’m carrying stepladders and stands for the flashlights I frequently use for photoshoots.

I like the way the Focus handles, too, while the ride is comfortable and the cabin well isolated from road noise. All the controls have a really pleasing action and I’m finding myself enjoying twisty roads more than I have in other cars I’ve run recently.

But the engine is still my favourite thing about the Focus. It’s never a drag on a long trip, providing plenty of performance. Economy could be better, though. My 40mpg average is 15mpg shy of the official figure – disappointing as most of my miles are on the motorway.

Other than that, for me the Focus Estate hits the right note in more than ways than one.

“I jumped into Otis’ Focus at the test track, and it took me a few moments to register that I was in a three-cylinder EcoBoost car. It’s fast and refined.”Owen Mildenhall, Senior road tester

“Just bought one of these cars, and it’s amazing. But I can’t get near the 58mpg Ford quotes. I normally return 43mpg in town and 45mpg on a run, although that’s with a full load.”Chris, via www.autoexpress.co.uk