The Ford Focus CC drives well and boasts a big boot, but has reliability questions 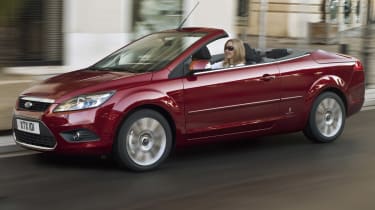 Ford has been late to many parties over the years – and the Ford Focus CC, based on the old-generation Focus, is another example. Rivalling the VW Eos and Renault Megane C-C, the convertible doesn't really bring anything new to the sector with its folding metal roof, although it does have a decent boot. There is a wide range of engines of which the diesels are the best and while it drives better than its rivals, is heavier than the standard Focus and isn't as agile.

Ignore the 1.6-litre and 2.0-litre petrols which are both quite slow and head straight for the 134bhp 2.0-litre diesel. It has lots of low-down torque and plenty of shove for overtaking. The strengthening that has gone into the chassis as a result of the loss of the roof means the Focus CC isn't quite as light on its feet as the standard car, but it is still better to drive than a VW Eos and Renault Megane C-C, while the whole structure feels stiff and wobble-free. The ride is firm but comfortable, and refinement is good with the roof up. There isn't much buffeting even at high speed roof down, and while the diesel is noisier than the petrol, it's still easy to live with.

As the petrol engines require quite a lot of encouragement to get anywhere quickly, it's the diesel all the way here. And it's impressive, returning 48mpg and emitting just 156g/km of CO2. Insurance costs are on a par with rivals like the Renault Megane C-C and Vauxhall Astra TwinTop, while the Focus CC should retain more of its value than both, even if it is still behind the VW Eos. Servicing shouldn't be much more expensive than a regular Focus hatchback.

While the VW Eos cleverly manages to hide its bulky roof mechanism, the Focus CC does not. It was styled by Pininfarina, but there is a lot of metal around the rear end with a large deck that looks ungainly. The tail-lights are very fussy too. That said, the Renault Megane C-C is not a great looker either, while all cars come with alloy wheels, which really brighten things up. The dashboard is lifted straight from the standard car (albeit with some extra metal trim to make it more upmarket) so there is a simple layout with logical controls. There are three trim levels: CC-1, which comes with air-con and all-round electric windows, while CC-2 adds a Quickclear windscreen and fog lamps and the top-spec CC-3 boasts leather, a CD changer, auto lights and wipers, plus electric seats.

There are two sides to the story here – you don't get much rear seat space (they are only suitable for small adults or children) but with the roof in place, the Focus CC has an enormous 534 litre boot. That is about as big as Mondeo. However, this shrinks by half when the roof is folded away, while it is much more difficult to stow items as the load area is much reduced. All that said, the Focus CC is a surprisingly practical car.

There is cause for concern here. Owners have reported problems with roof leaks – especially on early cars. As for the rest of the car, the Focus CC suffers from the same strengths and weaknesses as the standard Focus. Safety levels are good with a five-star Euro NCAP crash test rating, front, side and curtain airbags and standard traction and stability control. 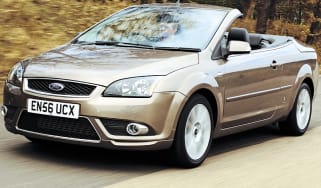 Oh dear, Ford. The Focus CC comes across as a half-hearted effort that falls short in looks.
Skip to HeaderSkip to Content