Is EcoBoost turbo a good match for MPV? We find out 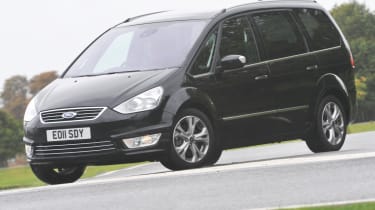 The Galaxy is still one of the best full-size MPVs around. It ticks all the important boxes for space and comfort, without losing Ford’s handling poise. Plus, the new petrol engine is surprisingly flexible. But  the excellent diesels are still a better choice than this new EcoBoost unit if you do lots of motorway miles. And this Titanium X model is pricey; family buyers would be better off with a mid-level Zetec.

The biggest car Ford builds now comes fitted with one of the brand’s smallest engines.
But while some buyers might baulk at the idea of driving a car the size of the Galaxy with a 1.6-litre petrol unit, the firm’s EcoBoost turbo technology means this seven-seater is cleaner and noticeably more powerful than the standard 2.0-litre petrol version.
Video: watch CarBuyer's video review of the Ford Galaxy
[[{"type":"media","view_mode":"content_narrow","fid":"69258","attributes":{"alt":"","class":"media-image"}}]]
Once you’re on the move, the powerplant is smooth and quiet. But even though it serves up 240Nm of torque, there’s a real lack of urgency at lower revs which may catch drivers off guard around town.
This does mean you have to work a little harder to hustle the car along, but the light controls and slick gearchange make it easy to drive, even on longer journeys.
A huge cabin and cosseting ride comfort are the Galaxy’s biggest assets, and it can seat seven adults – or swallow 2,325 litres of luggage – with ease.
Yet despite the practicality, it’s surprisingly fun on the road, if not as sharp as the smaller S-MAX. Unfortunately, there’s a price to pay for the engaging dynamics, as even the stop-start can’t bring emissions and economy close to those of diesel versions. We hit a mere 33mpg – a figure that will worsen once fully loaded.
Share this on TwitterShare this on FacebookEmail