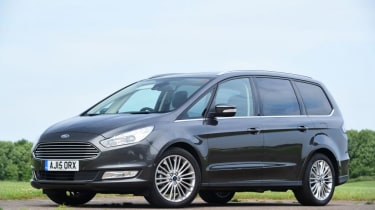 The MPV was created in the mid-eighties, but its heyday was during the nineties, and Ford led the pack.

As the master of affordable family transport, Ford introduced the first Galaxy in 1995 in conjunction with the Volkswagen Group, which offered its own versions (the VW Sharan and SEAT Alhambra). However, Ford went its own way with the second-generation Galaxy of 2006, and it did the same with the Mk3, which arrived in 2015.

While this edition looks much like its predecessor, it’s an all-new car and comes with up-to-date safety and driver-assistance systems, as well as excellent connectivity.

It’s no wonder the Galaxy is the most popular car in its class, and this translates into plenty of choice on the used market. 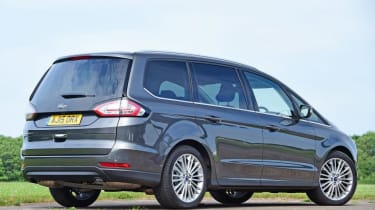 The 2.0 SCTi came only with a six-speed PowerShift auto box; other engines got a six-speed manual, but the 148bhp and 177bhp 2.0 TDCi units were offered with an auto.

A facelifted Galaxy went on sale in September 2018. While it had the same engines, the 2.0 TDCi diesel was renamed EcoBlue, and came in 119bhp, 148bhp, 187bhp or 237bhp forms. Adaptive cruise control was also introduced and the auto gearbox became an eight-speed unit.

Most Galaxys have a diesel engine and that’s no bad thing, because the petrol units aren’t as frugal. While the manual gearbox works well, the automatic is also slick, so we’d recommend a diesel engine with whichever gearbox suits you best. 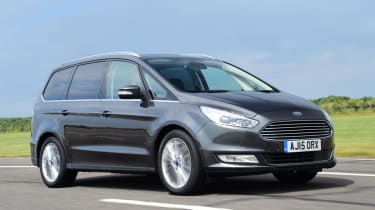 Alternatives to the Ford Galaxy Mk3

Older versions of the Galaxy had much more direct competition, including the Chrysler Grand Voyager, Renault Espace and Peugeot 807, but the Mk3 has fewer rivals.

One of the most talented is Ford’s own S-MAX, which is less spacious but better to drive, while the SEAT Alhambra and its VW cousin, the Sharan, offer space, decent dynamics and refined comfort. Also worth a look is the Citroen Grand C4 Picasso (now the Grand C4 SpaceTourer), which doesn’t have as much space, but its snazzy interior includes plenty of child-friendly features.

You could also join the SUV crowd, and consider the Nissan X-Trail, Land Rover Discovery Sport or Hyundai Santa Fe. All are available with three rows of seats, but have less space in the cabin than the Galaxy.

Unlike many recent cars, all Galaxys come with the reassurance of a space-saver spare wheel rather than a ‘mobility kit’.

Four-wheel drive was offered only with the manual-gearbox 2.0 TDCi 150, and the 2.0 TDCi 180 with an auto transmission.

Reliability generally seems to be good, but the electrics can play up so check everything works as it should, and look out for warning lights.

Many Galaxys have been used as private hire vehicles in town, leading to tired suspension and brakes, and possibly heavy cabin wear. 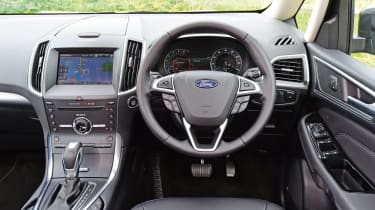 This is one of the Galaxy’s strengths, with high-quality materials and loads of space. Drop the third row and the boot takes 1,301 litres – and 2,020 litres with every rear seat down. Unusually, the third row is fine for adults, while each middle-row seat slides back and forth for ultimate versatility. The array of cubbies, user-friendly dashboard and decent connectivity give you a winning combination.

Petrol Galaxys have to be serviced every 12 months or 12,500 miles. The service sequence runs minor, minor, major; the smaller check costs around £215, while the larger one is £295. Diesel Galaxys alternate between minor and major – about £245 and £335 respectively – with intervals every 18,500 miles or two years. 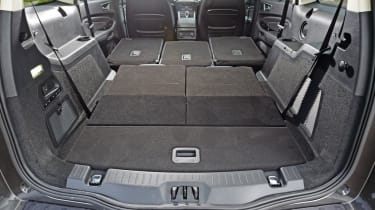 This Galaxy has had four recalls. The first was for LED headlight failure in cars built up to February 2016. Models made from May to October 2015 were recalled in March 2018 over cracking sumps, while clutch failure on pre-June 2016 cars led to a campaign in July 2018. And in November 2018, Ford recalled cars built up to April 2018 because of issues with a compressor pulley.

The Galaxy is not as big a seller as it once was, so this third-generation model hasn’t yet featured in our Driver Power surveys. Even carbuyer.co.uk has just five owner reviews, but all are five-star write-ups, and none of the owners (all of whom chose diesel) has experienced any problems. Common themes include good economy, excellent cruising abilities and generous equipment.

MPVs have fallen out of favour in recent years, as buyers shift towards ever more versatile SUVs. But if you need to seat up to seven people, even if it’s only occasionally, or you want something with a huge load bay and brilliant versatility, an MPV such as the Galaxy is likely to tick every box – and more. If one thing puts buyers off – apart from the car’s size – it’s the thought of driving a car that steers like a commercial vehicle. But fear not; try one out and you’ll see why owners think the Galaxy is out of this world.