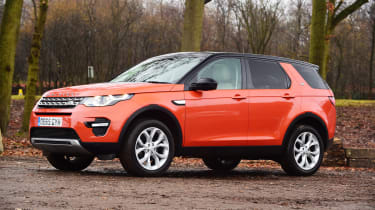 As with all Land Rovers, the Discovery Sport is brilliant off road and is a very capable tow car, too; and like its siblings, you’ll pay handsomely to own one. That doesn’t make the Discovery Sport poor value, though, because you get a cabin crammed with premium materials, go-anywhere ability and seven-seat usability in most cases. But a quick scan of owners’ forums and the carbuyer.co.uk driver reviews soon highlights lots of tales of woe when it comes to reliability and build quality. Most dealers are good, but fixes can prove elusive, so thoroughly inspect any potential purchase before handing over your cash.

When Land Rover launched the original Freelander in 1997 it was a big step for the legendary 4x4 maker.

Created to take on the Toyota RAV4 and Honda CR-V, the Freelander was a huge success, and the brand followed it up in 2007 with the equally successful Freelander 2. So when that car was replaced by the Discovery Sport in 2014 there were some people who thought Land Rover had missed a trick by taking its entry-level model upmarket.

But the new arrival became the second-fastest-selling Land Rover ever, with 100,000 examples snapped up in the first year. Does the Discovery Sport make a great used buy, though? 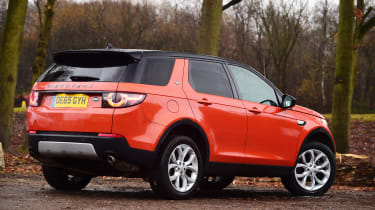 The Discovery Sport took over from the Freelander 2 in September 2014. The only engine offered was a 2.2-litre SD4 diesel with a nine-speed auto or six-speed manual box. An eD4 front-wheel-drive edition was launched in late 2015.

All of these early versions had seven seats, but in September 2015 a 2.0-litre TD4 Ingenium diesel engine replaced the SD4 unit and this brought a five-seat choice; gearbox options were as before.

A disappointing 2.2-litre diesel engine powers the earliest cars; the 2.0-litre Ingenium unit is far better. Only the eD4 has front-wheel drive; all other models feature four-wheel drive, which helps with towing and improves security when it’s icy. But the eD4 is the most frugal engine of all – and the least powerful. 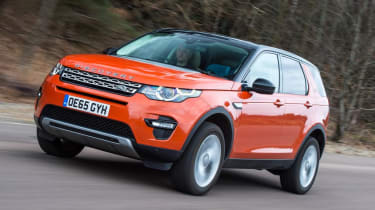 Plush compact SUVs to put on your shortlist include the Audi Q5, BMW X3 and Mercedes GLC, all of which bring performance, excellent build quality and a prestigious image. The same goes for the Range Rover Evoque, which still looks stylish seven years after it arrived.

If value is more important than a posh badge we’d suggest you take a look at the Skoda Kodiaq, Kia Sorento and Hyundai Sante Fe, all of which feature seven-seat practicality and lots of equipment at keen prices.

Offered in five-seat form only, the Ford Edge is also good value; the same can be said of the Ford Kuga and Honda CR-V, along with the Toyota RAV4.

Wheels vary between 17 and 20 inches; 18-inch rims give the best blend of looks and ride quality.

Climate control systems can fail for a variety of reasons; dealers have several methods to effect fixes.

Outside temperature gauge faults are common. It’s located in the door mirror, which has to be replaced.

A squeaky tailgate is usually down to it rubbing on the tail-light cluster. Repairs don’t always succeed, however. 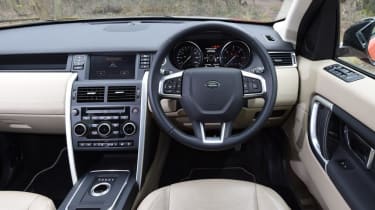 Easy to use but short of design flair, the Discovery Sport’s dashboard is busy, and so is its steering wheel, although both work well enough. Cabin room is excellent, yet the third row is for children only; cars with a glass roof feel more spacious inside. The boot can stow between 194 and 1,698 litres, depending on how many seats are in use. 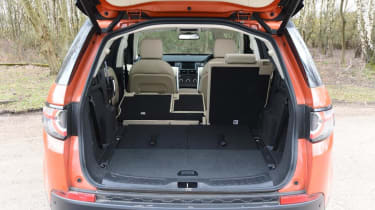 The Discovery Sport has been recalled five times, but the first campaign affected just one car. There were three recalls in 2016: one for possible fuel leaks in diesels due to a chafing hose under the bonnet, the second for short circuits caused by a chafing wiring loom and the third for faulty seatbelt pre-tensioners. The last was in May 2017 for potential petrol and diesel fuel leaks.

A 24th place in our Driver Power 2018 survey is a decent result, although the Discovery Sport is still quite new. Owners particularly like the interior, along with the practicality and boot space, plus the safety features. They really don’t like the running costs, though, while reliability and build quality get a thumbs down.