JLR's new 2.0-litre Si4 Ingenium turbo petrol engine has been added to the Land Rover Discovery Sport range, but is it a winner? 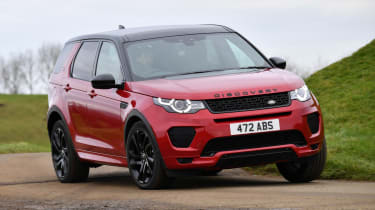 This new petrol engine is a punchy and refined addition to the updated Discovery Sport line-up. However, it’s difficult to recommend here due to its poor fuel economy, steep list price and high running costs. The less powerful petrol isn’t much more economical, but it’s not limited to the flagship HSE Dynamic Lux trim – making it significantly cheaper to buy.

Jaguar Land Rover couldn’t have picked a better time to slot the first of its new ‘Ingenium’ turbo petrol engines into its SUV range. Buyer confidence in diesels has nosedived since air-quality issues were raised, and registrations fell by 30 per cent last month compared with October 2016.

Until the Government fully clarifies what taxation plans it has in store for even the cleanest Euro 6 diesels, that trend looks set to continue. Petrol and hybrid sales have increased, and car makers such as JLR are racing to widen the appeal of their diesel-biased ranges.

The new 2.0-litre, four-cylinder Ingenium petrol engine made its debut earlier this year, and is now available across a number of JLR models. The Range Rover Evoque and Discovery Sport are the first Land Rovers to benefit from the Si4 unit, which is available in two forms: a base 237bhp version, and the flagship 286bhp unit fitted to our test car. They form part of the brand’s annual model year updates, and give us our first chance to try the updated car in the UK. 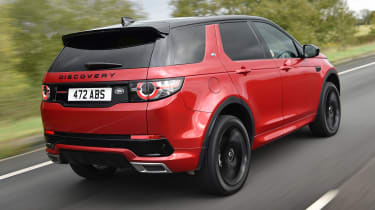 The turbo petrol motor produces a healthy 400Nm of torque, enough to propel the seven-seat SUV from 0-60mph in just 6.5 seconds. That’s pretty close to hot hatch pace, which is impressive given the Disco Sport weighs nearly two tonnes. It’s deceptively brisk, despite needing to be revved more than the equivalent diesel. The nine-speed auto box keeps it in the power band, however. Nor does the engine run out of puff when it’s stretched towards the red line, as many turbo petrols do.

The same engine also appears in the F-Type sports car, and while the Discovery does without the Jaguar’s cabin sound generator, the jet-like whooshing sound under full throttle makes up for the relative shortage of engine noise. Ease off and refinement is better than the diesel’s, too.

However, there is a major downside: the similarly fast twin-turbo diesel SD4 has a claimed average economy figure of 45mpg, but this quieter petrol can muster only 33.6mpg in the official tests. In the real world, things are even worse; over our mixed A and B-road test route, we never returned more than 24mpg, and enthusiastic driving will slash that further. 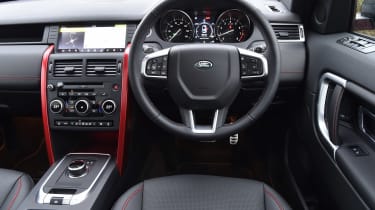 This most powerful version is also available only in top-spec Dynamic Lux trim, which at nearly £50,000, is lumbered with the Government’s £310-a-year list price tax.

Combine that with a first-year VED rate of £800 due to the petrol’s CO2 emissions, and it’s clear that, for now at least, opting to avoid diesel comes with a significant cost penalty. There are rumours of extra taxes on the way for Euro 6 diesels, but for now it’s difficult to recommend this car on cost.

The standard ‘Dynamic’ exterior pack gives the baby Discovery a sportier look, with larger air intakes and gloss-black exterior trim. It also includes an ‘upgrade’ to 20-inch alloys, but these have an adverse effect on the ride and cause the SUV to fidget more at low speeds. 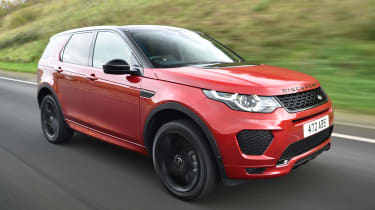 Road noise is more noticeable than with smaller rims, too. Still, the handling is as tidy as ever, with quick, accurate steering and decent body control. The Jaguar F-Pace is a more incisive driver’s tool, but lacks the impressive off-road capability of the Land Rover.

Elsewhere, updates are minor. There’s an increased colour palette with contrasting roof options, new interior trim, and changes to the seat foam. Lumbar support is added to all electric seats, too. Previous model year updates were wider-ranging, and ensured the Disco Sport stayed competitive in the face of a growing number of seven-seat rivals. Even now the interior feels as robust as a Land Rover product’s should, while the materials feel plush to the touch.

Rivals such as the new BMW X3 now have the edge on technology, but this remains a very well-packaged car, which unlike the BMW, offers a handy 5+2 seating layout. There’s a massive boot available with the seats stowed, too.

It’s a family SUV that should be on your shortlist, but it’s hard to justify in this spec.